Review: The Bars Between Us by A.S. Teague 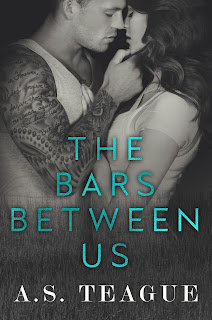 The Bars Between Us is the newest release from A.S. Teague and it's a contemporary romance standalone that once again reiterates just how talented of a writer she is. The love story between Bronnson Williams and Grace Monroe is one that's both heartwarming and heartrending. When Bronn and Grace meet, he thinks to himself that he isn't the kind of man that someone like she should hang around with. But they forge a friendship that belies a far deeper connection between the two. When these two fall for one another, it's almost as if nothing can break them...until one secret comes out in the open and both Bronn and Grace are left reeling. Will they be able to overcome the ghosts of their pasts or will all those ghosts to continue to haunt them and break these two apart?

If that prologue doesn't reel you in and get your heart squeezing in empathy, I don't know what will. In each of the A.S. Teague books I've read so far, she's always managed to snag my attention from the get-go and it goes without saying that she did it once again with Bronn and Grace's story. My heart broke for these two because if any two people so deserved a happy ending it was Bronn and Grace and for them to share that happily-ever-after together? Gah! Theirs was certainly a love worth fighting for, but goodness, that stumbling block was like a mountain that very few would dare even consider scaling. I'm purposely being vague, of course, because hello, spoilers, but suffice it to say that I seriously had to consider what I would have done too had I been in either one of their shoes.

No tears on my end, but this is a read with quite a bit of angst to it. Bronn and Grace haven't exactly been leading picture-perfect lives and dealing with the aftermath of the revelation that puts a halt--temporary or otherwise (read the book!)--to their relationship was no easy feat. What I loved most about these two main characters was that they owned up to who and what they were, faults and all. Neither one is perfect by any means, but they always felt real, so that even when they had their missteps, I met those with a hint of frustration but a load of understanding. Who doesn't love a book that has a story that makes you want to block the rest of the world out for a couple or so hours and main characters you're invested in? I'm giving The Bars Between Us five out of five stars. ♥

Purchase The Bars Between Us on Amazon.