Review: All or Nothing at All by Jennifer Probst (Billionaire Builders #3) 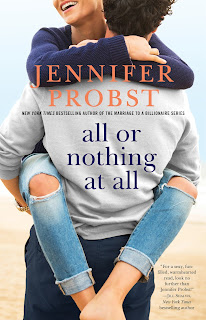 I can't believe this series is over already! Gah! Jennifer Probst closes out Billionaire Builders, her contemporary romance series with a mix of blue-collar and white-collar courtesy of three brothers who are in the home building and renovating business with one in charge of construction, the other in furniture designing and making, and one more in architecture and design. The Pierce brothers--Caleb, Dalton, and Tristan--had gone their separate ways, their bond fracturing after the death of their beloved mother, the same mother who they discovered had died with another man by her side. She had left her husband and three sons behind, and that feeling of betrayal and not knowing what was real and what wasn't had the brothers following their own paths. Upon the death of their controlling father, the family-owned construction business only falls fully in their hands if they're all able to work together for a year's time and turn a profit. While their relationship as brothers has mended and they've grown closer, and the business is doing better than ever, Cal and Dalton have found love as well. Now, it's Tristan's turn...

Seven years ago, Tristan Pierce decided it was time to cut and run, leaving behind what was left of his family. This was something he needed to do, and while he thought he'd get his then-girlfriend to go with him to New York, he was shocked when Sydney Greene turned him down. His return to the family fold and to Pierce Brothers Construction also meant he would have to work alongside Sydney, now a divorced mother to a young daughter named Becca. They try to maintain a cordial working relationship, but they're also aware that there's hint of a spark between them that remains and it would take very little to rekindle it. But along with that spark is the hurt and betrayal that lingers, both Tristan and Sydney feeling as if they were abandoned by the person they thought they could rely on most. When they're forced to work together on a new project, they hope to, at the very least, be friends again, but the line between the platonic and romantic is easily blurred. This could very well mean their second chance to get everything right. That is, until Sydney's secret is revealed and everyone's lives change again.

Okay, so I'm not a huge fan of secret-keeping when it involves the kind of secret that Sydney not only kept from Tristan but from those closest to her, which was basically Tristan's brothers and their wives, all of whom had considered Sydney as part of the family. I can only think of one particular reason where keeping this kind of secret would be okay, and that so wasn't Sydney's reason. The fact that she also kept it for as long as she did cost her some points in my eyes. Having said that, however, I Tristan lost points of his own when he treated her horribly wrong for the amount of time that he did after the secret had come out. Did these two have their reasons for their actions? Yes, but come on! Haven't either one of them heard about communication and the downfall connected to passive-aggressiveness? Argh! But when things were good between them, goodness, but how easy it was to fall in love with Tristan and Sydney and the family they were creating with Becca. All things considered, All or Nothing at All was a really good 4.5-starred read and I think it wrapped everything very nicely in the Billionaire Builders series. ♥

Read my reviews for the Billionaire Builders series:

Purchase All or Nothing at All on Amazon | B&N | iBooks | Kobo.