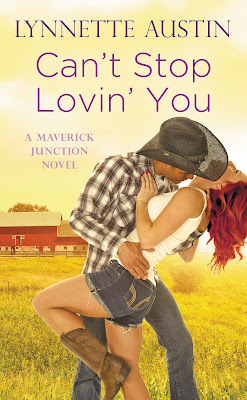 About Can't Stop Loving You
Maggie Sullivan can't wait to get out of Texas. Luckily, she just got the break she needed to make her big-city dreams a reality. But then Brawley Odell swaggers back into Maverick Junction, looking hotter than ever in his dusty cowboy boots and well-worn jeans. He's the guy she still dreams of at night. The guy who broke her heart when he left her behind.

Fed up with city life, Brawley jumps at the chance to return home and take over the local vet's practice—and get back to the smart, sassy woman he's never been able forget. He couldn't be prouder of Maggie's new wedding-dress business... until he realizes it may mean losing her all over again. Determined to win her back, Brawley must find a way to convince Maggie that their one true home is with each other. 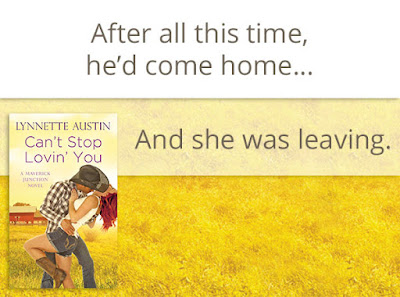 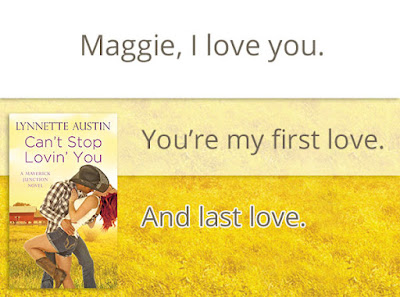 “You’ve lived without me for a long time.”

“But I always knew you’d be here. That I could get my Maggie fix whenever I needed it with a couple hours’ drive.”

“I know.” He held up a hand. “Not fair. I won’t ask you to stay. I know better than that. This is something you have to do.”

“That’s not going to happen.”

“Fine.” Her heart hammered in her chest. She moved to the leather love seat, her hand stroking it. “This is yummy.”

“So are you.” The thought tumbled out before he could stop it.

She turned, so close he could feel her breath on his face.

He hadn’t meant for it to happen. He hadn’t brought her here to make a move. But damn if he could keep his hands, his mouth, off her.

He’d watched her all day, that gorgeous red hair done up in a tumbled mass, curls escaping and trailing down her neck. He’d itched to pull out whatever pins held it and spill the fiery strands around her. Wanted to run his hands through it, feel the silky softness.

More, he wanted to unzip that swath of silk and let it slide to the floor. Wanted to touch the creamy white skin beneath. Needed to taste her. Her lips, the back of her knees, her stomach.

Needed to know if she still wore the little silver ring through her belly button.

Needed almost more than his next breath to hear her quiet little sighs, her cries of delight as they made love.

His gaze drifted to her red, red lips when her tongue peeked out between them.

“Yeah?” He raised his eyes back to hers. They always reminded him of a Texas meadow right after a spring rainstorm. What man could resist? Sure as hell not him. He caved. Pulled her to him. Felt her heat.

The first kiss was tentative. After that initial foray, though, he lost sight of his good intentions, of right and wrong.

His hand moved to the back of her neck, drawing her closer still. Inching into that silken mass of hair, he removed the pins one at a time, sighed when the strands spilled loose over his fingers, his hand, his arm.

His mouth left hers, traced a path along her chin, over her cheek. He buried his face in her hair and breathed deeply. God, she smelled good.

Maggie gave him those little sighs, those moans he’d been craving.

His lips trailed back to hers. When they parted, he slid his tongue inside to dance with hers. He backed her up till she was against the sofa.

Sliding a hand beneath her knees, he scooped her up and laid her on the soft leather, then followed her down. His hands ran the length of her, his fingers trailing beneath the hem of her dress.

He felt her cool hands on his heated flesh. Somehow she had his shirt out of his pants and half unbuttoned. Her head lowered, and she trailed a line of kisses across his bare chest. She stopped at the small scar just above his navel, flicked her tongue over it.

Brawley sucked in his breath. Maggie had been the one to mark him there with a stick when they’d been eight-year old pirates fighting it out with pretend swords. He put a finger beneath her chin and raised her head to taste her lips again.

She had matured, ripened. Was everything the eighteen-year-old Maggie had been and more. Much more.

She answered with a long, deep kiss.

He groaned. “I want you so badly it hurts.”

“Shut up and kiss me, cowboy.” 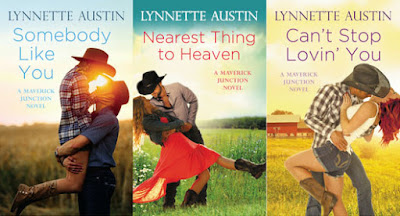 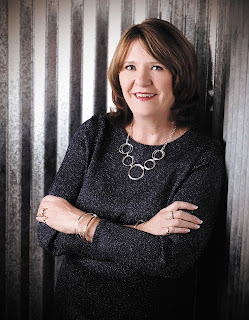 Lynnette Austin loves Starbucks, peppermint patties, and long rides with the top down and the music cranked up! One of the great things about writing is that daydreaming is not only permissible but encouraged. She grew up in Pennsylvania, moved to New York, then to Wyoming, and presently divides her time between Florida's beaches and Georgia's mountains. She's been a finalist in RWA's Golden Heart Contest, PASIC's Book of Your Heart Contest, and Georgia Romance Writers' Maggie Contest. Having grown up in a small town, that's where her heart takes her-to those quirky small towns where everybody knows everybody...and all their business, for better or worse.