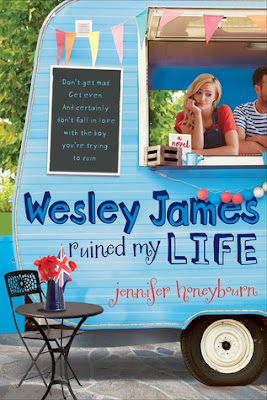 About Wesley James Ruined My Life
Sixteen-year-old Quinn Hardwick’s having a rough summer. Her beloved grandmother has been put into a nursing home, her dad’s gambling addiction has flared back up and now her worst enemy is back in town: Wesley James, former childhood friend and life ruiner.

So when Wesley is hired to work with her at Tudor Tymes, a medieval England themed restaurant, the last thing Quinn’s going to do is forgive and forget. She’s determined to remove him from her life and even the score once and for all—by getting him fired.

But getting rid of Wesley isn’t as easy as she’d hoped. When Quinn finds herself falling for him, she has to decide what she wants more: to get even, or to get the boy.

Read my 3.5-starred review of Wesley James Ruined My Life. 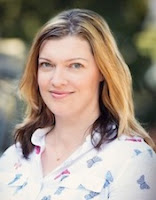 Jennifer Honeybourn works in corporate communications in Vancouver, British Columbia. She’s a fan of British accents, Broadway musicals, and epic, happily-ever-after love stories. If she could have dinner with anyone, dead or alive, she’d have high tea with Walt Disney, JK Rowling, and her nana. She lives with her husband, daughter, and cat in a house filled with books. Wesley James Ruined My Life is her first novel.