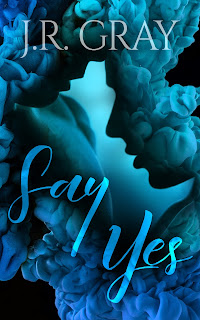 Say Yes is a novella which was originally released in 2015 as part of a multi-authored series and is being re-released as what I'm guessing is a wholly separate series written by author J.R. Gray. Here, we're introduced to nineteen-year-old university student James Bennet, who, after the death of his father, is financially cut off by his mother. While his father made sure that James's tuition for his entire college stay was paid for, having money for all his other needs required James to find a job, which is how he lands one at a clothing store specializing in men's suits and accessories. It's there that he meets Charles Walton, an older gentlemen who exudes confidence and wealth...and a dominance that calls to James. Charles is immediately drawn to the much younger man, and he knows all about the need for control. But in order to show James what he needs, Charles requires James's assent.

This was a quick read, one that had a fair amount of BDSM--some of which was alluded to, though most of the actual action takes place in the latter half of the book--and not much romance, not that that's necessarily something that would turn me off. What kept me going was my curiosity with where James and Charles's..."relationship" was headed. I didn't really have that connection to either one of them, not the kind that would have had me totally invested in their welfare, but again, I wanted to see how far they would go. The story ends with a "happy"-for-now feel, though the peek at Yes, Sir, which is the next book that continues James and Charles's story is enough to make me want to continue reading about these two men. I'm using quotes because there's a lot of ambiguity when it comes to what exactly they share with each other and what their end goals are.

As far as the author's writing goes, well, there were moments that I was caught by surprise, maybe because I was expecting this to be more explicit than it actually turned out to be. There were also times that the story seemed to sputter and start instead of have this continuous flow, almost like I missed something vital. I wanted more information as to why James's mother treated her son the way she did after the death of his father, especially since James's made a point of denying his own sexuality due to her conservative beliefs. Part of the blurb mentions James's Catholicism, but there was just a smidgen of it in the actual story, making me wonder just how devout he really was or if it was more due to his adherence to his mother's staunchly held conservatism. Hopefully, as the series progresses, we get to know James and Charles on a deeper level. For now, I'm awarding 3.5 stars to Say Yes. ♥