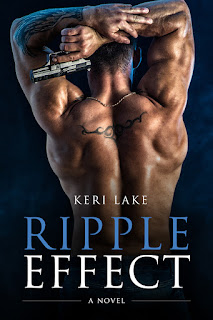 
A fine mist coats my vision as I stare down at the vestiges of my past. I can’t do this to Dylan. I can’t put her in danger. Somewhere along the lines, she’s come to mean more to me than I care to admit. In some ways, my lifeline. She’s the tranquility to the raging storm inside of me, and I’ll suffer a brutal death before I let another man touch her.

To save my beautiful butterfly, I have to set her free.

Originally released as a four-episode serial, Ripple Effect is a romantic suspense novel penned by Keri Lake, an author who has shown she more than knows her way around the genre. I was able to read the four episodes, which tested my nearly non-existent patience since there was a wait between each one, and yes, because this was a serial before, the first three parts ended in cliffhangers. Was the wait worth it? Was it ever, because Lake brings together two of the most unforgettable main characters I've come across in a long time--the enigmatic antihero that is trained assassin Ripley and the wily non-damsel-in-distress that is foster child Dylan--in an addictive dark romance that has twists and turns tossed your way as Ripley's and Dylan's lives become so unavoidably entangled. There's danger galore, but does Ripley save Dylan or does Dylan save Ripley? Maybe they save each other. Maybe.

Ripley is a killer, one who made took his first life at the age of sixteen and never looked back. He isn't a good person nor has ever pretended to be one. He is who he is and those who make the mistake of crossing him pay for it severely. So, why is it that when he catches the not-quite-legal waif breaking and entering his home, he makes her an offer that he makes sure she cannot refuse? This would mean keeping Dylan alive--someone who has seen him and could very well discover exactly what it is he does. But there's something about this girl that entices him--something that, not before long, enthralls him to the point that Rip isn't exactly sure what it is that's building between them. There's no future to be had for Ripley and Dylan, but they'll soon learn their pasts have ripple effects they won't be able to run from. In the end, lives may be put at risk and taken...including Rip's and Dylan's?

Sordid but sexy, Ripple Effect is exactly the kind of read you should allow to sully your imagination. Keri Lake has given readers a story that's difficult to look away from, even when you find yourself wondering how Ripley could treat Dylan a certain way and why Dylan would continue to allow him to do so. I wound't necessarily call it debasement. Think of it more as him pushing her to what may be considered normal limits, and in the process, both Ripley and Dylan realize just how strong of an individual Dylan actually is and that she's able to withstand a great deal in order to get what she wants in the end--love, home, freedom, and family, and keep in mind that those don't necessarily have static definitions to them. Without giving too much away, this does have a satisfying ending and has me hopeful for a spin-off for at couple of peripheral characters. Ripple Effect is a five-plus-star must-read. ♥