Review: Watch Me by Ada Frost 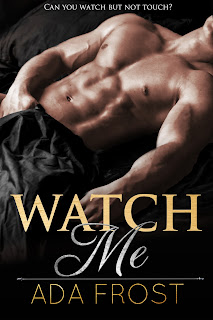 Watch Me is only the second book from Ada Frost that I've had the pleasure of reading, but this standalone is such a departure from the previous title I read--Silent Scars, the fourth in her Surviving series--that it proved to be a delightful surprise of a read. It's the story of two people who seemed to be polar opposites in terms of personality. Lawson Stone is set in his ways, demanding things be done in a precise and pre-approved fashion. The fact that he happens to be one half of a company that's made millions fulfilling the sexual fantasies of countless people affords him to be exacting. And then he meets Abigail Warner. She's been forced upon him to serve as his personal secretary. She's intelligent, efficient, and independent...and a hell of a sexy distraction that Lawson could never have hoped to be prepared for.

I admit it. I thought Lawson Stone was an ass, albeit one with some obvious class, but an ass nonetheless. He's tightly wound and he likes his things neat and orderly in all aspects of his life, but there's only so much that he can control. Abby Warner is unexpected as is his reaction to her. Her opinion of him isn't all that great, other than the fact that he's a gorgeous specimen of male hotness, but there's definitely a fair bit of lustful thoughts going on between the two. These two have chemistry and tension and the banter was to die for, often making me snicker or smile. Abby gave as good as she got and I liked how she held her own in the face of a figure as imposing as Lawson. The evolution of their relationship was fun and flirty but there was also depth and a fair amount of angst there, so don't think that it was just about gobs of sex.

The author did a really great job weaving together a story that went from hate to love but always with enough attraction and lust to always keep everything moving forward. Abby was so easy to like, and while it took longer for me to actually like Lawson, the guy did grow on me. These two together were irresistible and they made for such a memorable combination that led to a memorable romp of a read. There were two notable supporting characters, Lacey, who was Abby's cousin and who helped Abby get the job with Stone Industries, and Sam Lloyd, Lawson's best friend and business partner. Lacey gets her own happily-ever-after here, but I have high hopes that Sam will get his own story told in the near future because he's one interesting character I wouldn't mind learning more about. Watch Me was a stellar 4.5-starred book. ♥

Purchase Watch Me on Amazon.