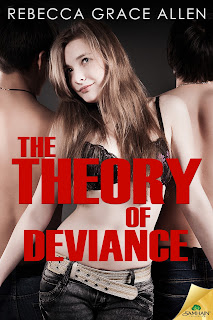 Note: This ARC was provided by Samhain Publishing via NetGalley in exchange for an honest review.

The Theory of Deviance is the third installment written by author Rebecca Grace Allen in her Portland Rebels series, which is a trilogy of stories about a group of three friends—Connor Starks, Dean Trescott, and Mikey Pelletier—set in Portland, Maine. Book three is about twenty-five-year-old Mikey and his journey of discovering and accepting his sexuality and coming to terms with how his perceived deviance fits in with the strict teachings of his faith and the norms of society. He shares his story with twenty-one-year-old Krissy Porter, who was introduced as a vacationing student from NYU in the second book, The Hierarchy of Needs. Krissy's roommate, twenty-seven-year-old Rafe, whose last name I can't recall at the moment. This wasn't as much a romance as it was about finding your true self in a world where other people and institutions spend more time telling you who you are and should be than simply accepting you.

It would be easy to say that part of Mikey is still a virgin is his shyness, but it's more complicated than that. Born and raised a Catholic, he can't help but stop himself from fully embracing the fact that he's bisexual and has needs and wants that may be deemed deviant-like behavior by his church and his parents. Now, I also happen to be Catholic and I know that there countless archaic stands the church has taken and stood by, even in the face of progress. My being Catholic does play a bit in how I felt about this book, but then there's more than one kind of Catholic. There are many things that I continue to hold true and practice as a Catholic, but I also happen to believe in divorce and I don't believe that you'll end up in hell if you happen to be anything but heterosexual. I'm also pretty sure I'm not the only Catholic who feels that way. I think it becomes a matter of reconciling one's religious beliefs—or lack there—of with their personal convictions.

Krissy and Rafe may help Mikey come into full realization of his sexuality, but moving forward with those realizations were all up to Mikey. He had to deal with the perceived fallout from his parents and from his church. I liked that he wasn't the kind of guy who simply shrugged everything off and said "Fuck it!" Facing those issues didn't mean that he had to pretend to be someone he wasn't or that he had to comply with what his parents wanted from him. He became his own person, and while the Mikey he is may not be up to everyone's skewed standards, he learned to deal with it all. You can't please everyone, but his relationships with his two best friends, Connor and Dean, as well as their respective girlfriends, Gabby Evans and Jamie Matthews, withstood everything else and that is what this series has always been about at its very core. They've rebelled but they've also loved and lived. The Theory of Deviance receives 4.5 stars. ♥

Read my reviews for the Portland Rebels series:

The Theory of Deviance (book three) - 4.5 stars - My Review (posted above)

Purchase The Theory of Deviance on Amazon | B&N | Kobo.