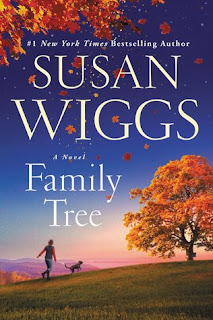 In the span of a year, TV producer Annie Rush's life has changed...but she has no idea how much it's changed until she wakes up from the coma that's she's been in ever since a freak accident that left her badly injured. Not only does she have to deal with the memories that are trickling back but she has to re-learn what used to be things she took for granted. She used to be married but her ex decided to file for divorce while Annie was in coma and sent her unconscious body back to her family homestead in Rush Mountain in her hometown of Switchback, Vermont. As Annie faces her new life, she needs to reconcile the lessons of the past with her dreams of the future in order to fully embrace the present. With her family by her side and the affection and attention of her first love, Annie Rush get a second shot she didn't think she needed.

Family Tree is my introduction to bestselling author Susan Wiggs and I found myself falling in love with the story of a woman who begins a new phase in her life while she was unaware of the previous one ending. This is quality women's fiction, with doses of romance, drama, and humor that give it a full package feel. Annie Rush's love story is one she shares with Fletcher Wyndham, her high school sweetheart and the guy who's always held the biggest piece of her heart, even when they had both taken different paths in life. We get glimpses at their shared past, how they fell in love and later fell apart. These are interspersed with how their paths have crossed yet again and how they don't have to deal with regrets and what-ifs because they already went through it all in the aftermath of their break-ups. They're more mature and act accordingly.

Saying this is a second chance love story merged with a small town romance would be limiting the appeal of this novel. Annie is such a strong female lead character. We see her slowly but surely regaining her independence and re-discovering her dream but seeing it in a whole new light. Things work out a certain way, and sometimes, we think something isn't meant to be when all that was really off was the timing. We also see Fletcher on his own journey with his son along for the ride, meaning he has considerations to take note of, but just like over a decade ago, family plays a huge part in his decision making. There's also Annie's mother, Caroline, who comes to her own share of realizations when it comes to her ex-husband. Overall, Family Tree is one of those books that gives readers a story truly worth experiencing. Five stars. ♥