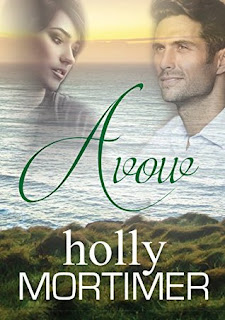 Avow the prequel novella to the Murphy's Law contemporary romance series from Holly Mortimer and my very first read from the author. This was a second chance romance between high school sweethearts Ryan and Chloe, who at the tender age of eighteen decided to get married. But after one day of wedded bliss, Mrs. Murphy left Mr. Murphy without a word of goodbye or an explanation. Ten years later, Chloe returns to Ireland and walks into the bar Ryan's cousin owns. Ryan is torn between anger and longing at seeing his estranged wife and the girl he's loved even after a decade apart. He wants answers and he intends to get them, no matter how insistent Chloe may seem at simply making him sign yet another set of divorce papers. He's never signed a single one that she's sent his way, and he's not going to do anything of the sort now. But Chloe had her reasons for leaving Ryan, even if leaving meant breaking his heart and her own in the process. Will their love story finally come to an end or is this their shot at a happily-ever-after?

This was a quick read and not having read the author's previous series, which ended with the love story of Ryan's cousin Brennan, the eldest sibling among the brood whom I'm assuming this spin-off series will be about, it did well as a standalone. As an introduction to the Murphy brood, it falters a bit since Aiden Murphy, whom the first full-length novel will be about, is indeed mentioned but he didn't pique my curiosity. I would think that it serves better as a transition between the old and new series, but again, this is with me not having read The Sisters. As for the story itself, it had angst and drama, what with Chloe keeping the truth from Ryan for as long as she did. There are parts of the story that ring familiar, i.e. self-sacrifice, years apart but still in love with each other, but it still made for a good read. The twist near the end of the story was like the icing on the cake. If you like second chance romances, Avow may be right up your alley. It doesn't have a cliffhanger and can be read and enjoyed on its own merits. This gets four stars. ♥