Book Spotlight: Burn Down the Night by M. O'Keefe 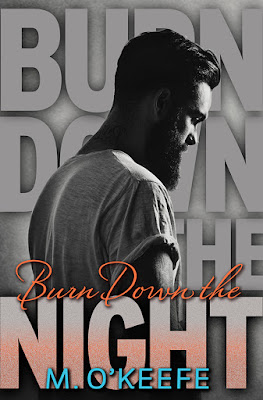 Burn Down the Night
(Everything I Left Unsaid #3)
by M. O'Keefe
Release Date: August 9, 2016
Loveswept

About Burn Down the Night
A battle for control turns explosive as a beautiful con woman takes a bad-boy biker hostage in this edgy, seductive novel set in the world of Everything I Left Unsaid (“Toe-curlingly sensual.”—Katy Evans) and The Truth About Him (“Absolutely one-click worthy”—J. Kenner).

The only thing that matters to me is rescuing my sister from the drug-cooking cult that once enslaved us both. I’ve run cons my whole life, and I’ll use my body to get whatever I need. Max Daniels is the last connection I have to that world, the one person reckless enough to get involved. Besides, now that his brothers have turned on him, he needs me too.

The deal was supposed to be simple: a place to hide in exchange for rescuing my sister. Now he’s my prisoner. Totally at my mercy. But I’m the one captivated. Enthralled. Doing everything he asks of me until I’m not sure who’s in control.

We both crave the heat. The more it hurts, the better. But what if Max wants a different life now, to leave the game . . . to love me? I thought I knew better than to get burned. Now I’m in too deep to pull away. And the crazy thing is . . . I don’t want to. 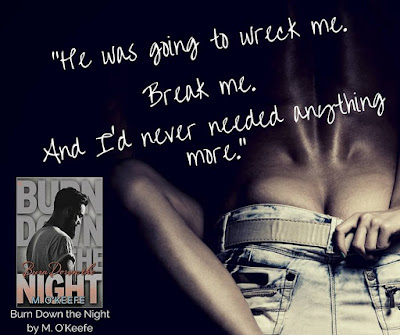 Read my five-plus-starred review of Burn Down the Night.

Add Burn Down the Night on Goodreads. 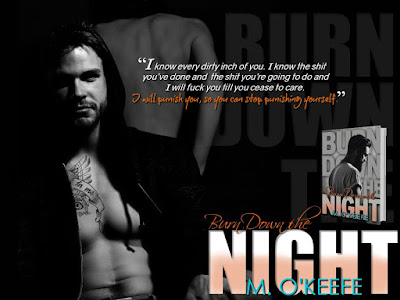 An Excerpt from Burn Down the Night
I wasn’t watching him sleep. I was thinking. I was formulating a plan. An argument that would sway him, that would make him see things my way.

The tiny, white bikini I wore was a visual aid.

Because if there were any breaks I caught in this life, they were a rocking metabolism and Aunt Fern’s rack. I made this cheap, white bikini look better than it should.

Sitting on the dresser, I licked yogurt from a spoon and tried to think of what was going to really sway a guy like Max. What was going to make him give up on revenge and instead help me get my sister free.

He was sprawled across the bed, the sheets pulled up to his waist with his injured leg kicked out. Every once in a while he jerked, like the dream he was having had teeth, and the handcuffs rattled against the bed.

I could add that to the list of shit I never thought I’d do.

Finally he stirred in earnest and I held my breath. Trying not be nervous. Trying not to show him that I was scared. Max was a wild animal and if he sensed fear he’d come after me.

He lifted his head off the mattress, his black hair, wild around his head. That spot on his scalp with the stitches was so pink and wounded. Tender. The only soft thing about him. The rest of him, his chest and arms, was rawhide and muscle and grit covered with bright tattoos. And technicolor bruises.

Max was whittled down to the bone. No excess. I recognized it because I felt exactly the same way. Like there was nothing to feed me.

If we weren’t in this stupid situation, we might have been friends. Lovers for as long as we could make it work because we were the same kind of people. The same sort of wild and alone.

“Joan?” His voice was rough and deep. He lifted his hands to rub his eyes but the handcuffs stopped him.

“Morning, Max.” I licked my spoon. “How are you feeling?”

“I’d feel a whole lot better if you let me go.”

“Not going to happen.”

He lifted his free arm. Stretched. Made a fist out of his hand and then relaxed it. “What’s your end game here, Joan? You’re going to keep me locked up here forever?”

“Only until you give up on this revenge idea.” And agree to my plan.

“Not going to happen,” he parroted my words back at me.

He shifted in the bed and only barely winced. “Better.”

“You think you could eat some soup without spilling it all over yourself?”

“I think I could teach you a lesson about having a smart mouth.”

I hummed in my throat as if disappointed in him and then dug up another spoonful of yogurt and put it in my mouth. He watched every motion. My tongue. My hands. He missed nothing.

And maybe it was because he was imagining what it would be like to kill me.

But I preferred to think he was wondering what it would be like to fuck me.

It was a long shot considering his injury, the fever, his being handcuffed to the bed. But I was banking on him being a dude.

He lifted his eyebrows at me and slowly pushed himself up farther up the bed. He leaned against the cast-iron headboard, exposing all of his skin, which was covered in dark tattoos. He looked like some kind of leopard. Some sleek animal that if unchained would tear me apart.

He would tear me apart.

And I could not wait. 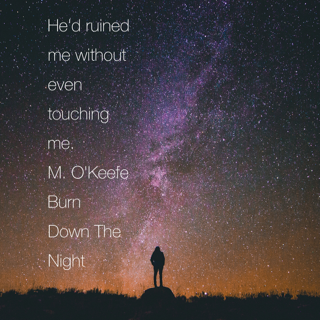 Burn Down the Night Playlist

I remember hearing this on Sons of Anarchy and thinking I would have to use it for a book. It’s incredibly evocative and the chorus with the singer praying to God to “crash this train.” Like he knows what’s happening is wrong and it would be better for everyone for it just stopped.  For a good portion of BURN DOWN THE NIGHT – Max and Joan are like this.  (The song ends up being kind of political, which isn’t very reflective of my book at all, but I love that chorus)

And oh my love remind me, what was it that I did?
Did I drink too much?
Am I losing touch?
Did I build this ship to wreck?

(Do I wanna know?)
If this feeling flows both ways
(Sad to see you go)
Sort of hoping that you'd stay
(Baby we both know)
That the nights were mainly made for saying things that you can't say tomorrow day.

Everything about this song makes me think of Max. It’s dirty, sexy and dark. And his feelings for Joan are much the same way.

Can't keep my hands to myself
I mean, I could but why would I want to?

Frankly, this song is crazy sexy to me and kind of perfectly reflects the dynamic of Max being locked up and Joan doing everything he asks her to do. Sexy and kind of wrong in all the right ways.

This is another Max song. It’s just a sexy masculine song about a bad man coming to terms with his guilt. Love it.

You take my body as your prize

I’m totally bonkers for this Canadian band. I feel like their whole sound and all of their songs deals with the power dynamic between men and women. And frankly that lyric is so damn sexy….

So what you trying to do to me
It's like we can't stop, we're enemies
But we get along when I'm inside you, eh
You're like a drug that's killing me

This song is perhaps the sexiest thing ever. And it’s featured heavily in the free short story that came out in a pre-order contest before Burn Down the Night. 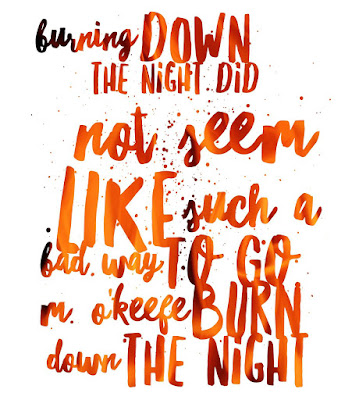 M. O’Keefe can remember the exact moment her love of romance began—in seventh grade, when Mrs. Nelson handed her a worn paperback copy of The Thorn Birds.

Writing as Molly O’Keefe, she has written thirty novels, won two RITA awards and three RT Reviewers’ Choice Awards. Her books have been on numerous “Best Of” lists including Publisher’s Weekly, Kirkus, and NPR.  She lives in Toronto, Canada, with her husband and two kids. 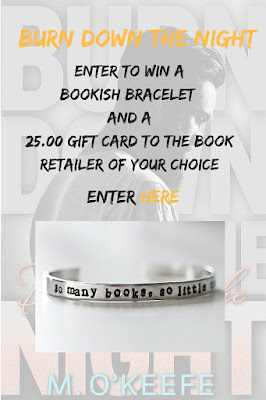