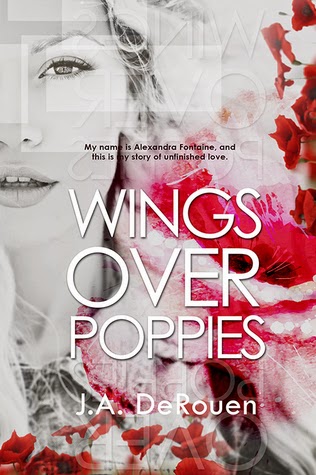 Wings Over Poppies is the second novel in the Over series by J.A. DeRouen and, after finishing the first book in the series, I admit that I went into this one with a bit of trepidation. I had high hopes for its predecessor and was left disappointed and I seriously didn't want a repeat performance. Suffice it to say that by the time I finished this book, I was pleasantly surprised to find myself satisfied with almost every aspect of this new release. Don't you just love it when your expectations are exceeded above and beyond?

Alexandra "Alex" Fontaine is a successful artist and gallery owner and has been living the life she's always dreamt for herself. Only there's something that's been missing for six years. Not something. Someone. When she first met West Adler, she was a seventeen-year-old torn between following the map her parents had made out for her and mapping out her own journey. She never expected to fall in love with West but fall in love they did. Too soon, he left to join the army and six years later, she still hasn't heard from him.

After all this time, Alex still holds on to the hope that West will return to her and that the love they shared has never waned. When she finally receives word that not only is he still alive but that he lives nearby, she's stunned. Not once has he tried to reach out to her and when she confronts him, gone is the warm and loving boy of her past, replaced by a cold and stiff former soldier with scars inside and outside. He pushes her away each chance he gets and the time comes when she concedes defeat and walks away dejectedly.

West Adler has never believed that he was good enough for his Poppy, his Alex. He's always loved her and in the beginning, it was the difference in their social status that held him back. Now, it's his PTSD and dealing with all the horrors he witnessed while serving. He tries to stay away from her and when she makes an effort to be with him, he treats her horribly, needing her to get away from him as far as possible. He refuses to subject her to the damaged man he's become, even if it means breaking their hearts repeatedly.

For a love that never truly ended, both Alex and West need to believe that it's worth fighting for. Alex has waited six years for West and aside from struggling with his life after being discharged, West struggles with asking Alex to wait as he has a better hold on his inner demons. Some relationships are meant to simply end, sparring the participants further heartache. Then there are those special unions that neither time nor circumstance can put asunder. Which kind do Alex and West have and how will their story finish?

I absolutely LOVED this book! The story tugged at my heartstrings and had me going through a barrage of emotions. Frustration and elation are two feelings that I became more than familiar with while reading the love story of Alex and West. The depths of despair that these two were going through was palpable but you hold on to the hope that they get their happily ever after because they're more than deserving of it. There was no sugarcoating of the harsher and more painful moments that Alex and West had to endure.

This was an advanced reader's copy (ARC) so I'm going to keep my fingers crossed and hope that the editing errors I noticed were taken care of prior to the book's release today. So, I'm not going to consider said editing issues when I give my rating because that wouldn't be entirely fair, not unless this was the final draft and the published copy. ^.^ I'm happy to say that Wings Over Poppies is one of my favorite reads for 2015 and am giving it five stars for a wonderfully written story and beautifully crafted characters. ♥

Grab a copy of Wings Over Poppies on Amazon | B&N | Kobo.