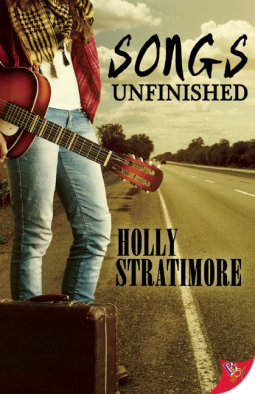 Songs Unfinished is a contemporary romance novel by author Holly Stratimore and is about two women whose shared love of music is the basis of their friendship but both have survived their own share of painful and heartbreaking experiences, making them wary and fearful. As they both develop feelings for each other, will they be ready to leave their respective pasts behind or will they allow themselves to be held hostage by it all and throwing away their chance at forever?

Shawn Davies is on the run, driving from Los Angeles to her hometown of New Hampshire. She's running from her unfulfilled dreams of making a name for herself as a singer and songwriter and from the life she led in LA. But upon her return, she finds out that she has no one to turn to or anyone willing to take her in...until she hears a song on the radio that makes her remember that maybe all is not lost. She takes her chances, hoping there'll be a light at the end of the tunnel.

Jaymi Del Harmon turned her back on Los Angeles and the potential of making it big with her band Passion Play to return to New Hampshire and take care of her ailing mother. Months later, Jaymi's mother has been laid to rest but the pain still remains, along with the terrible memory of catching her ex in bed with someone else the night she needed her the most. Now, she wants to focus on her life and her band, but when a friend from LA seeks her help, she doesn't say no.

The more time they spend together, the more Shawn and Jaymi get to know each other, something they weren't fully able to do in LA. Shawn's had a crush on Jaymi from the time she first saw her, and now that she's single again, Jaymi can't help but see Shawn in a different light. However, Jaymi is hesitant to pursue anything more, having been betrayed once, and Shawn doesn't want to cross the line and make Jaymi feel as if she's using her, something she's confessed to doing with others in LA.

But, as they say, the heart wants what it wants, and both Shawn and Jaymi acknowledge their mutual attraction but decide to take things slow. Just when things are progressing nicely for both of them, their pasts come back to haunt them. In Jaymi's case, she's been burned before and trusting Shawn with her heart wasn't easy but now she may be regretting doing so. For Shawn, losing the one person she's ever fallen for is made worse when someone from the past is back for revenge.

I enjoyed reading about Shawn and Jaymi and how they evolved as individuals and as a couple, finding their way through everything that they've been through. The dynamic they had with the supporting characters was also interesting, especially when Shawn was able to notice things about one of Jaymi's oldest friends while Jaymi seemed to be clueless.

This is the author's debut novel and I sincerely hope she comes up with more stuff for me to read. The book was about music, love, forgiveness, trust, friendship, and family. It had me flipping through my e-reader in one sitting in the wee hours of the morning while I was sick. It was THAT good. I highly recommend Songs Unfinished and give it 4.5 stars! ♥

Pre-order a copy of Songs Unfinished on Amazon | B&N.