Review: "Some Like It Sizzling" by Robbie Terman (Perfect Recipe #3) 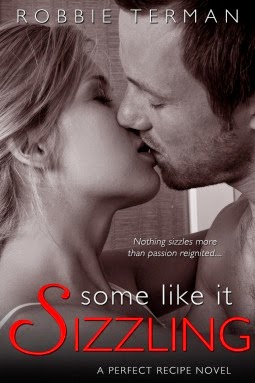 Some Like It Sizzling is the third book in the Perfect Recipe series by author Robbie Terman. I'm not sure if this is the final book in the series since this will have made all the stories of the three female characters introduced in the first book complete. This one is a bit different than the first two in that it's a second chance romance AND there's a side love story involving the ex-wife of the male lead character.

Jenna Rawley thought she had it all and getting married to her fiancé was just another step in the right direction. That was before she was unceremoniously left at the altar and the bank accounts she shared with her fiancé were either frozen by the FBI or emptied altogether. Now, she's forced to return to the home she left behind to pursue the life she wanted and puts her in constant contact with her ex.

Luke Kearney's heart was irrevocably broken when the girl he had just proposed to left the country without a word fifteen years ago. Since then, his life has gone on--he's a firefighter and has a great son with his ex-wife who also happens to be one of the nicest people around. When he comes across the girl who left him, he refuses to be put in the same position he was in fifteen years before.


The attraction between Jenna and Luke is still very much there but Luke doesn't trust Jenna. She's never fully explained her reasons for leaving him and she's hesitant to discuss them with him, wanting to simply focus on moving forward. But how can these two truly move on, whether as friends or something more, if the past still has a firm hold on both of them, creating a large shadow on their future?

Now, like I mentioned earlier, aside from Jenna and Luke's love story, readers have the love story of Olivia Shaw, Luke's ex-wife, and Riley Brock, star player of the Chicago Brawlers and Griffin Lange's former teammate (Griffin was the lead character in book two). I'll be honest--I actually preferred Olivia and Riley's story to Jenna and Luke's. It felt more real and they were both likable characters.

I admit it--I didn't really like Jenna, though she did grow on me by the end of the book. Her reason for leaving Luke wasn't all that great and the fact that she left without a word remained. There's simply no excuse for that sort of behavior. I truthfully didn't think she deserved to have a second chance to be with Luke but the heart wants what it wants and am glad she proved her love to and for Luke.

I've enjoyed the Perfect Recipe series as a whole and the first two books were ones I fell in love with. While I wasn't a fan of Jenna's, I did, however, love the side story that belonged to Olivia and Riley and am giving Some Like It Sizzling four stars mostly due to them and the book's epilogue. ^.^ The series gets an average rating of 4.5 stars and would recommend it as a whole to fellow bookaholics. ♥

Pre-order a copy of Some Like It Sizzling on Amazon | B&N | Kobo.