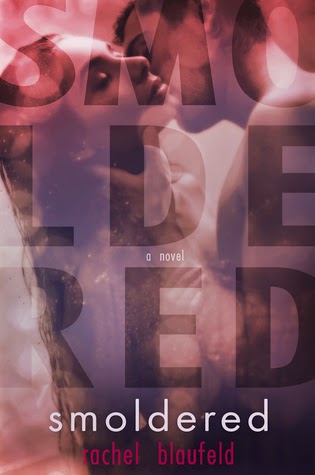 Smoldered is the second book in the Electric Tunnel series by Rachel Blaufeld and the events take place across the same timeline as the first book and contains a few flashbacks. The main characters were introduced previously so I do suggest that you read book one, Electrified, prior to jumping into this one in order for you to have some familiarity regarding what The Electric Tunnel is and the relationship between best friends Asher and Lila. ^.^

From the age of three, Natalie Parker has only had eyes for one boy--Asher Peterson--and even though she never believed she would be enough for him, her heart has never belonged to anyone else. They were once friends but spent several years apart. When they meet again, Natalie is working at a strip club in order to earn a living for herself and her son Quinn. Asher offers her a job at his own club, needing to protect and take care of her.

Since agreeing to work for Asher, Natalie appears to have finally given in to becoming his friend with a heck of a lot of benefits but that doesn't include him spending time in her home. Natalie prefers keeping some distance even as she gives in every single time Asher reaches out for her. She prefers the no-strings-attached approach to their non-relationship but nothing prepares her for discovering not one but two naked women in Asher's house.

Natalie has been a keeping a secret for far too long and when Asher discovers it, he decides it's time he goes after what he's always wanted and needed--Natalie. Even as Natalie wants to be with Asher, she's hesitant, not sure if she's ready to trust him fully even as he tries harder than he's ever tried before. She isolates herself and pushes Asher away, but what happens when all her pushing makes Asher feel that he's had enough and gives up on them?

Admittedly, I had issues with the novel that came before this one BUT this second novel went above and beyond my expectations. The author took the story to places I wasn't expecting and if you've read enough of my reviews will know that I love it when that happens. The characterizations were nicely achieved, with flawed characters that had a great deal of angst but equal amounts of heart. You seriously want to cheer each one on towards happiness.

I liked that the story was told from Asher's and Natalie's points of views respectively and while I initially didn't think having Mike's POV there as well would work, I enjoyed reading things from his perspective. It also sets things up rather nicely for the third book, which will focus on Mike Wind, everyone's favorite bouncer/bodyguard/unofficial brother. This cast of characters belonging to the Tunnel family each deserve to have their stories told!

This book was about family, the one we're born into and the one we create for ourselves. It's about forgiveness and giving those we care about the most the chance to become part of our lives even after having been apart. It's about redemption and learning to let go of the doubt and anger that we carry in order to find love and peace of mind. Smoldered was a great book to read and I'm going to happily give it a much deserved 4.5 stars! ♥

Grab a copy of Smoldered on Amazon | B&N.