Review: "The Rules According to Gracie" by Stefanie London 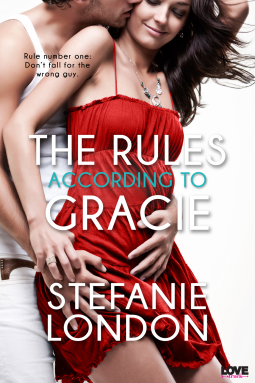 The Rules According to Gracie by Stefanie London is a romance novel about a woman trying and failing to find the "ideal" guy for her and the man she feels is the walking epitome of everything about a guy that she needs to stay away from. She's got a whole slew of rules that she abides by while he only has one but he's willing to break it for the one girl who's captured his attention...and his heart.

Gracelyn "Grace" Green has come up with a list of qualifications that any guy she's dating must meet. Unfortunately for her, a lot of her dates may get a lot of qualities checked off but none of them have been enough to keep Grace's attention past the first outing. The one guy that she can't seem to stop noticing is the tatted up owner of the bar she goes to for all her dates and someone she considers a friend.

Desmond "Des" Chapman is more of a rule breaker than a follower but the one rule that he does have was borne of a painful breakup. He's always ready to help bail out his friend Grace every time she gives him the secret signal to do so but he isn't quite as ready to ask her out, no matter how interested he is in her. He's already been burned once and Grace is shares too many things in common with his ex-fiancée.

One of Grace's rules is to stay away from guys like Des, guys who scream "bad boy" by the way they look. Des maintains his distance as well but when he points out that her plan for finding the right guy by using a checklist isn't working out for her, Grace decides to ask him for help instead. In the process, they both confront the reality that the pull between them may be more than just simple attraction.

After one night together, Grace makes a decision that essentially forces Des to end his friendship with her. Hearts are broken and Des is far too angry and hurt to even contemplate speaking to Grace again. Try as she might, Grace's apologies fall on deaf ears. Both of them need to make certain decision that will have them breaking whatever rules they have if they truly want a happily ever after together.

While I wasn't too much of a fan of Grace's in the beginning, the more I read about her motivations for pursuing a certain kind of guy, the more she grew on me. Des may look like a bad boy but he's an all-around nice guy who deserves to experience love and happiness. Their story is essentially about opening their eyes and finally seeing that what they really want has been in front of them all this time.

This was a fairly quick read and one that I quite enjoyed. Even with the short length of the book, everything was paced well and actually covered a longer period of time than you would expect. The story has its share of family drama and painful pasts but with a good dose of humor to balance things out. The Rules According to Gracie is perfect for romance readers everywhere and I give it 4.5 stars! ♥

Pre-order a copy of The Rules According to Gracie on Amazon | B&N | Kobo.