Review: "The Quick and the Undead" by Kimberly Raye (Tombstone, Texas #1) 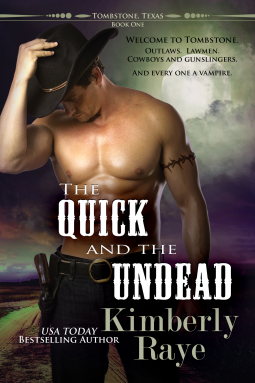 Note: This ebook was provided by BelleBooks via NetGalley in exchange for an honest review.

The Quick and the Undead is the first in the Tombstone, Texas series by author Kimberly Raye. The premise of a legendery town like Tombstone being turned into a tourist attraction that allows guests to fully experience what life must have been like at the height of the town's notoriety but with the main players being the actual people who lived at that time (cowboys and outlaws who were turned into vampires) was certainly an original one. Add to that a human for the female lead character and you end up with a book that promises to be an interesting paranormal romance ride.

Riley Davenport is a travel blogger and her latest tourist spot to check out is the one in Tombstone, Texas. The minute her eyes land on a man that screams "alpha", she knows she should keep her distance but there's something about him that she seems unable to resist. She's experienced firsthand what it's like to be with someone overly controlling and demanding and she refuses to suffer the same fate again. However, the sheriff of Tombstone appears to be a different kind of man altogether and we she realizes just how different he is, it may be too late for her to turn her back on him.

Boone Jarrett is Tombstone's sheriff, a position he held once before...give or take about two centuries ago. He, along with eight other members of "The Ten", are vampires and were turned by their sire Ike McCoy. Ike's gone missing for several decades now but Boone's getting a feeling deep in his bones, one that's telling him that a vampire bent on revenge is out to get the remaining Ten. Something else he's been feeling is an intense fascination for and attraction to their guest, a travel blogger who makes him crave her body and something more, something he's never felt for any other woman.

When Riley and Boone's attraction for one another becomes physical, they quickly realize just how powerful the pull is between them. Riley's past still haunts her, causing her to be hesitant, and Boone knows what becoming more involved with a human may mean for him. As they become even more connected, Riley witnesses a violent crime in Tombstone and Boone goes above and beyond to protect her as he and the other vampires begin to seek out the dangerous element that they need to face. Will Boone and Riley's relationship survive the danger and doubt that surrounds them?

Like I mentioned at the beginning of my review, the premise of this book was both original and interesting, a combination that I always consider a plus and one that draws me in. And yes, the story was both of those things and the characters were mostly likable, though Riley's inner monologue did grate on my nerves more than once. However, the text had a tendency to be repetitive and I'm sorry but vampires are the undead, ergo, they don't have heartbeats. I found it unbelievable that Boone could feel his own heartbeat when, in fact, he wasn't supposed to have one because, ummm, he's dead.

The twist in the story was a good one, though I did figure it out early on. It made the impending confrontation seem like one that would be filled with suspense but it kind of fell flat for me. Though, allow me to point out that while the suspense part of the book left a lot to be desired, the romance part was rather satisfactory. Riley and Boone's connection seemed natural, even though one was human and the other wasn't, and they were pretty good as a couple. All in all, The Quick and the Undead wasn't bad but it did stumble quite a bit. I'm going to give it three out of five stars. ♥

Grab a copy of The Quick and the Undead on Amazon | B&N | Kobo.