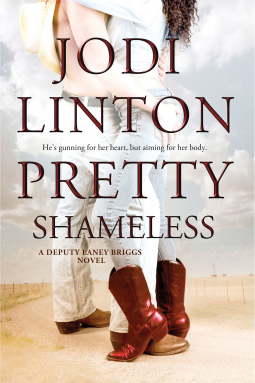 Pretty Shameless is the second full-length novel and fourth release in the Deputy Laney Briggs series by author Jodi Linton. The saying "You can't choose your relatives" is pretty apt when it comes to what this installment is about and its something that our favorite female deputy sheriff in red cowboy boots has come to live with seemingly all her life. Add to that a bullheaded boyfriend whose secrets are more tightly guarded than Fort Knox and one of her oldest friends who she's torn between staying close to and keeping her distance from and Laney Briggs is in for yet another adventure but this one may cost more than she's prepared to give.

In a teeny, tiny town like Pistol Rock, you would think that being the only deputy sheriff around shouldn't be too difficult for Laney Briggs. After all, how much trouble can the townspeople get themselves into? Well, it appears that trouble is a permanent resident in the area and when it involves one of Laney's relatives, the more stressful the situation for her. Laney's cousin Wyatt has skipped bail and not only is it Laney's sworn duty to go after him but her mother's on her to find him after she was the one who posted his bail. However, it seems that Wyatt is in deeper doo-doo than Laney thought and her very own Texas Ranger is somehow involved.

Where she feels either stonewalled or running around in circles with Gunner Wilson's inability to share everything he knows about Wyatt's case or whatever it is that's going on with his parents' very cold case, Laney finds an unexpected helping hand in Luke Wagner, one of her oldest friends and the man she shared a one-night stand with, one that she would rather forget but one he constantly reminds her about. He goes above and beyond and Laney is grateful but she's also very much aware that Gunner doesn't like Luke and that her body still reacts to him in a way that she's pretty sure her Texas Ranger boyfriend would not appreciate one bit.

Wondering who she can and can't trust, Laney needs to stay focused on the case of her squirrely cousin, a case that has evolved into something that involves a volatile mix of drugs, guns, and murder. Just when she thinks everything's over and done with, the sudden arrest of a particular individual has Laney asking herself if she's allowed herself to be used by those closest to her and if she can ever get rid of the doubt constantly niggling at her heart and mind. How does she move forward and who can she turn to in her desperate need to discover the truth behind everything that's been going on behind her back? Our favorite deputy sheriff is feeling very much alone.

Yep, it's official--this is my favorite among all the four released in the Deputy Laney Briggs series, so much so that I've pre-ordered the ebook, even though I've basically just finished reading the whole story already. What can I say? When I really love an ARC I've read, I'll go ahead and buy it, and the fact that it's only 99 cents is like a sign screaming at me to buy it already. ^.^ A word of warning though--this ends in a cliffhanger and I ended up with more questions than I did answers. But then, isn't that what cliffhangers are for--to reel you in and hook you so that when you're left hanging, you find yourself desperately counting the months until you get your answers in the next installment?

My curiosity is very much piqued and I can't help but wonder if the photo that Gunner was clutching is connected to his parents' murders and just what is really going on with that surprising arrest at the end. I'm pretty sure I know who Laney called at the end of the book but I can't say who I think it is and who's in the photo or who gets arrested because, then, that defeats the purpose of encouraging you bookaholics to go and read the book. Spoilers are far worse than cliffhangers...though I'm sure some of you will disagree. With each new installment, I've become more invested in Laney Briggs and her sassy ways and I'm going to happily recommend and give Pretty Shameless 4.5 stars! ♥

Pre-order a copy of Pretty Shameless on Amazon | B&N | Kobo.