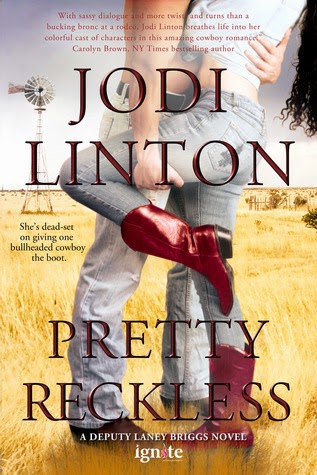 Pretty Reckless is the first book in the Deputy Laney Briggs series by Jodi Linton and is a mystery suspense novel with a dash of second chance romance thrown in for good measure. The star of the book, and the series as a whole, is a twenty-six-year-old deputy sheriff named Laney Briggs, a woman full of sass with beauty and an actual working brain to boot. When her personal and professional lives meet head-to-head during a murder case, Laney finds herself wondering just how reckless she's willing to be to get what she truly wants...if only she can figure out what (or who) that is exactly.

Laney Briggs' life may not be perfect but she's come a long way from five years ago, when she found the love of her life in bed with another woman. She's now engaged to her small town's veterinarian and is the best deputy sheriff around, considering her fellow deputy sheriff spends most of his town stuffing his face with anything edible. When she's called in to handle a dispute between two of Pistol Rock's not-so-finest, she discovers a dead body and requests for backup. Lo and behold, her backup shows up with an extra and unexpected member--one hot but hard-headed cowboy who happens to be her ex.

Gunner Wilson is back in Pistol Rock to figure out who's been running an illegal ketamine drug ring in the small town, but he's also made his presence seen and felt for a more personal and more important reason--his ex and the only woman he's ever loved, Deputy Sheriff Laney Briggs. It's been five years since he left Pistol Rock, both with a broken heart and a stitched-up butt after Laney shot at him (with rock salt!) but he's never forgotten or loved anyone else since his fiery ex. Forced to work together, Gunner's ready to show Laney that no one's ever going to take his place in her heart.

What starts as a "simple" case of disgruntled neighbors in the middle of a shootout turns into a murder investigation that soon evolves into a search for a ketamine drug ring. Laney's murder case is connected to Gunner's ketamine one and the two exes work as one, much to the dismay of Laney's fiancé and to the disgust of her mother. As much as Gunner hurt her by his betrayal, she can't deny that she still feels a pull to him and, if she's totally honest, she's still in love with the guy. Gunner takes advantage of their time together and gets mighty close for comfort, proving that they still sizzle as a couple.

In a town that seems to be populated with more misfits than should be considered legal in one area, Pistol Rock certainly keeps this deputy sheriff busy. She may think she knows everyone around town but some of the townsfolk have their own share of secrets that they're trying to keep her from discovering. However, a few threats written on Post-It notes and the untimely death of someone very close to her (which absolutely broke my heart) aren't enough to stop Laney Briggs from solving her case. With Gunner by her side, she's ready to show the bad guys that there's more to her than her red boots and good looks.

This was an overall entertaining read though it really was more mystery suspense than it was romance, which I don't have too much of a problem with since I do love a good mystery suspense novel. The story in itself was a good one that will keep quite a few readers guessing as to who's on the wrong side of the law. The characters are interesting and the kind that you'd like to get to know as the series progresses. Laney is a strong female lead character but far from perfect, further making her easier to relate to. There's a lot of humor and I'm always a fan of that fun mix of snark and sass.

My main issue with the book has to do with the editing or, should I say, the lack thereof. There were a lot of grammatical and syntax errors, and as much as I try to not that stuff take away from the reading experience as a whole, there were just too many to ignore. So, naturally, it does affect the rating I'm going to give the book but I am looking forward to reading more about Deputy Sheriff Laney Briggs and Texas Ranger Gunner Wilson. Hopefully, the next installments, which I'm about to read and review, will be better editing-wise and have a dash more romance. ^.^ Pretty Reckless gets four stars. ♥

Grab a copy  of Pretty Reckless on Amazon | B&N | Kobo.