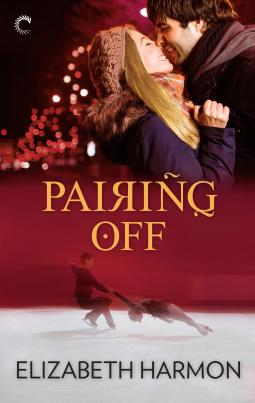 Pairing Off is a contemporary romance novel by author Elizabeth Harmon and is set in the wonderful world of figure skating. I've been a figure skating fan since the early 90s and my favorite pair of all time Ekaterina Gordeeva and Sergei Grinkov. When I saw that this book was about a two figure skaters who are brought together to form a new team, my interest was immediately piqued and I was thrilled when I was approved to read and review it. ^.^ This is the first in the debut Red Hot Russians series! ♥

Carrie Parker is an American figure skater whose last partner was caught in bed with a judge at the very competition they had just won as champions. Now disgraced and looked upon as a pariah of sorts, Carrie receives an offer to pair up with another partner. The catch is that she has to fly to Russia to meet her potential new coach and new partner-to-be. When she finally sees who it is, she immediately flashes back seven years ago, when they first met, but it seems he doesn't recognize her.

Anton Belikov is a Russian figure skater whose last partner dumped him for someone who would give her the potential to medal in future competitions. Ironically, that very last partner happens to be his still current girlfriend. In need of a new partner, he can think of only one--an American who suffered at the hands of gossips and media when her own partner was ensnared in a scandal. At first, he's standoffish and abrupt but that could very well be due to the fact that he's quite attracted to her.

When Carrie and Anton first met in Amsterdam, they were teenage figure skaters. She was part of a synchronized team and he still had his partner. They spent one memorable night together but Anton never saw the beautifully beguiling black-haired American girl who captured his imagination. With her natural blonde hair, Carrie doesn't immediately register as the girl Anton met. The attraction is, however, still very much there and still very much mutual. However, Anton has a girlfriend.

The more time they spend together, the more a friendship grows between the new partners. They visit different places and Anton shows Carrie a side of Russia that's different from the cold and unfeeling impression she initially had. Anton is very protective of Carrie and sincerely wants their team-up to work and succeed, even though they both know that time is against them. Petty jealousies and family issues threaten what Anton and Carrie have, but through it all, their friendship remains.

With everything being thrown their way, will Anton and Carrie be able to pursue their dreams of garnering a medal in their next competitions and will they be able to finally deal with their mutual attraction that has evolved into something much more? Carrie has secrets that she's never shared with anyone and when Anton asks her to gift him with her trust, she must decide if she's ready to take a leap of faith, not just with their pairing but with the one man who was always meant to be the one she loved.

I absolutely adored this book! I loved the differences in cultures and how Anton and Carrie worked on their partnership, then their friendship, and then much later on, their relationship. Even when tested, they proved that what they had was real and that nothing would stand in their way. I know this was an ARC so I'm going to set aside my issues regarding the editing stuff. This surprised and delighted me in ways I never expected and consider it one of my favorites for 2015. 4.5 stars for Pairing Off! ♥

Pre-order a copy of Pairing Off on Amazon | B&N | Kobo.