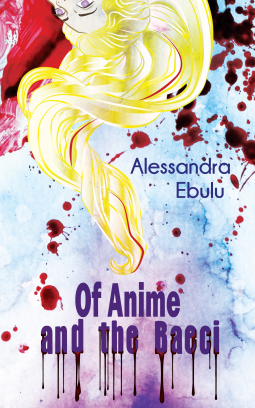 Of Anime and the Baeci is an M/M novella written by Alessandra Ebulu and is part of the Geek Out collection of novellas from publisher Less Than Three Press. The novellas are not connected to one another so each one can be read as a standalone. This was a quick and uniquely creative read and one that I actually enjoyed, especially since a lot was packed into a story so short.

Ray Zielki hasn't been in his new apartment that long but already he can't stand the Japanese songs that are blaring through his walls, no thanks to his neighbor. When he knocks on the door to make his pissed off feelings known, he's taken aback by the uniquely captivating appearance of Cata Nanuq, lover of all things anime and manga, two things Ray is totally clueless about.

Cata Nanuq immediately notices how good looking his next door neighbor but he would love to educate the guy on just how amazing anime and manga are. Once he's able to do that, he knows that Ray will have a better appreciation for both. It doesn't hurt that he'd like to connect with him in other ways as well, so he'll go out of his way to do his neighborly duty and spend time with him.

In the midst of all this, a serial killer appears to be on the loose, targeting young men who have an androgynous quality to them. His motives are based on revenge and as he moves down his list of victims, he's saving the very best for last. Someone who will be able to complete his mission, one that will result in far more death and destruction if he isn't stopped as soon as possible.

Even though Ray wants to pursue something with Cata, he hasn't been completely honest about his presence in the apartment building. When he's forced to finally reveal the truth, Cata is taken aback by how strange it sounds but will he be able to accept the revelation for what it is and will he be prepared to do what he must for not just for himself but for Ray and countless others?

This was certainly a different read from the ones I've come across lately and it was a nice change of pace. I was familiar with some of the anime and manga titles so I didn't feel too lost but I'm not entirely sure if non-anime and non-manga readers will be able to relate to the stuff mentioned in the book. Still, I hope other readers will check out Of Anime and the Baeci, which gets four stars from me. ♥

Pre-order a copy of Of Anime and the Baeci on Amazon | Kobo.