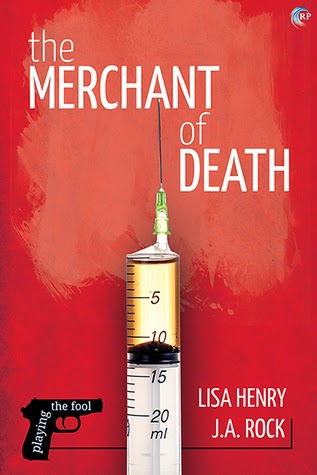 The Merchant of Death is the second book in the Playing the Fool series by the writing team of Lisa Henry and J.A. Rock and picks up soon after the events of the first book. As always when it comes to book series, I highly recommend that you read the books in order because that helps build the foundation as the series progresses. And well, the first book is really good as well so go and read it before starting this one! ^.^

Henry Page has run away...again. This time, though, he's got a good reason for doing so. His sister Viola called him asking for his help. But Henry isn't Henry to Viola. To her, he is and always will be Sebastian or, as she fondly calls him, Sebby. The Hanes twins only have one another to rely on and with Viola being in the condition she's in, Henry/Sebastian takes full responsibility and will do whatever he can for her.

Ryan "Mac" McGuinness is no longer surprised that Henry's run off...again. However, he can't focus all his energies trying to track him down because it appears as if someone's out to get him, trying to destroy his career as an FBI agent in the process. He soon realizes that he needs Henry to back him up on the events that happened in the cabin in Altona but first things first--he needs to find Henry, the sooner, the better.

As Mac finds out more about Henry's past, he suddenly knows where to find him. Once he gets there, he's in for a shock. Henry isn't Henry--he's Viola. Well, he's dressed and looks like his sister but he had to do it in order to find out what's going on in the center where she's been staying. Mac reluctantly helps Henry out, intrigued by the case but more so by Henry looking the way he does. Or is Henry now Sebastian?

Mac's personal and work issues are tugging him in opposite directions and the fact that he's got the FBI's Office of Professional Responsibility (OPR) breathing down his neck. When Henry appears to be connected in one way or another to names mentioned by his boss Val Kimura and by the OPR, Mac can't help but wonder if he's being played for a fool by the very same man he finds himself falling in love with.

Henry knows that what he and Mac is up in the air, due in no small part to his numerous disappearing acts, but he also knows that if he decides to take a chance, it could be something oh-so-worth it. His first instinct has always been to run but with Mac now being in hot water at the bureau and that it's a paid set-up, Henry knows he needs to stick around and be there for the man that he never imagined he'd ever fall in with.

Ah, goodness me. The stuff that Henry gets into certainly keeps Mac on his toes and definitely keeps their non-relationship rather interesting. The fact that Mac is an FBI agent and Henry is a grifter of sorts makes what's brewing between them difficult to define and complicates matters. The back and forth is often witty with an undercurrent of sorts. The thing is, does Mac want Henry Page or Sebastian Hanes or both?

The introduction of Viola, Henry's sister, was a good one because readers get to see a different side of Henry. He certainly carries a great deal of guilt upon his shoulders but what he does for her isn't merely based on that. There's a genuine love between Viola and her Sebby, something that Henry cannot fake or take lightly. Mac notices how vulnerable Henry is when he's Sebastian, a rare occurrence for Henry.

I was expecting the cliffhanger so I'm just glad that I have the ARC of the third book patiently waiting for me on my tablet. Each book in the series finds me becoming more invested in Mac and Henry and I really hope these two get their happily ever after. The Merchant of Death had suspense, mystery, and thrills of every good kind. I thoroughly enjoyed this second book and am giving it a perfect five-star rating. ♥

Pre-order The Merchant of Death on Riptide Publishing | Amazon | B&N.