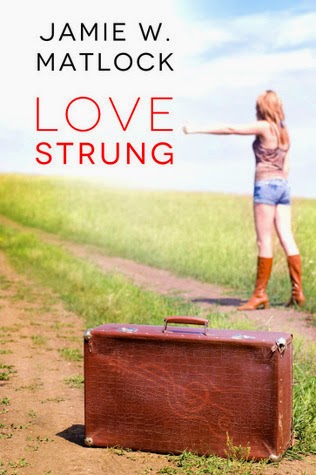 Love Strung is the second novel in the Love series by author Jamie W. Matlock and is about a young woman trying to find her place in the world by following her passion--music. Unfortunately, her dreams never prepared her for the harsh reality of trying to break into the music business and how one ill-thought night puts her on a path that opens her eyes to who she really is and what her heart truly desires.

Kennedy Masters is on a mission to prove that she deserves a place in the music industry. The recording contract she thought was the answer to her prayers has fallen through and now she's relegated to singing back-up to famous country singer Mick Callahan. When she steps foot on his tour bus, she has no idea that things are about to spiral out of control and that music will have to take a back seat for now.

Griff Callahan is sick and tired of cleaning up after the messes his brother leaves behind. Dealing with his latest "stray" has him pissed off more than usual, but that may have to do with the fact that he finds himself attracted to her. He sure as heck doesn't want his brother's sloppy seconds but then he discovers that there's more to her than he wants thought and he becomes more invested in her than he should.

The public thinks that Kennedy is Mick's latest flame after photos of them together are published in tabloids. However, Kennedy and Griff realize that what's going on between them is more than just a mere attraction. Just as things between them heat up, sibling rivalry that's actually more of sibling hostility between Griff and Mick as well as a host of other stressful situations threaten to end their relationship.

Kennedy is a young woman who's still obviously trying to make her way in the world but tends to act and speak before actually processing everything going on. Often, she seems rather sure of whatever it is she's about to do but when she's around Griff, she tends to second guess herself, which is actually a good thing because it allows her to think and weigh her options, though sometimes she's still recklessly irresponsible.

I liked Griff even though he did treat Kennedy rather terribly when their paths initially cross. He's obviously a good person who puts his family first. I was a bit unsure about how real his feelings were for Kennedy and vice-versa and that's mainly because they didn't really click as a couple for a good while. Later on, I finally got used to the idea of them being together and they did seem like a good fit by the end.

It would have been interesting to see the love triangle played up a bit more and having that as the main conflict. The idea of having two brothers falling for the same girl isn't new but this did have a fresh approach. Love Strung was a pretty good read and I did like how everything was wrapped up in the end. I'm giving it 3.5 stars out of five and will have a look-see at the first book in the series. ♥

Grab a copy of Love Strung on Amazon.