Review: "The Line Between" by Tamsyn Bester 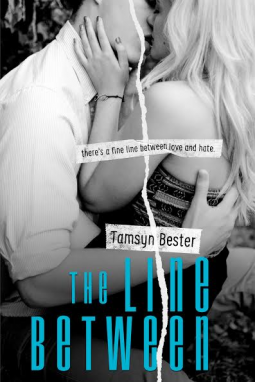 Let me begin by saying that while I did know I was receiving an advanced reader copy (ARC) and that ARCs that are used for reviews are given with the caution that there may be errors that have yet to be corrected, I was quite distracted by the stuff that needed to be edited in the ARC of The Line Between by Tamsyn Bester. I sincerely hope that the manuscript was thoroughly edited before its publication date because the errors do take away from the overall reading experience. That being said, I'm going to now proceed with my review and want to point out that my rating is based solely on the story and the characters.

Kennedy Monroe and Dane Winters have hated each other for what feels like forever. Their families have been in a feud for too many years and Kennedy and Dane, along with their siblings, Kennedy's older brother Charlie and Dane's twin Jewel, are caught in the crossfire, becoming both victims and purveyors of something they do not understand. The deaths of Charlie and Jewel in a car crash worsened what was already a hostile environment and while Kennedy tries to avoid Dane at all costs, Dane takes every opportunity to humiliate and embarrass Kennedy, all the while masking his attraction to her.

Now forced to live next door to one another in the co-ed dormitory building they both belong to, Kennedy refuses to have Dane intimidate her but she also can't deny that she notices him in a way someone who espouses to hate the other shouldn't. Dane is also finding it difficult to keep his feelings a secret, especially since it appears that other guys on campus have noticed how attractive Kennedy is. When they finally act on their mutual attraction, they decide to keep things secret, but that becomes nearly impossible when jealousies and doubts begin to affect them, all the while pretending they don't care one bit.

News regarding an ongoing legal battle between their fathers has Dane's father publicly accusing Kennedy's late brother of killing Dane's sister. Upon confronting her, Dane hurls very hurtful things Kennedy's way, leaving her broken. Things come to a head, leaving Dane in a world of regret and not able to simply take back everything he's said and done. Can generations of hatred be overcome by the youngest members of two feuding families or is it too late for them to move beyond the lines that have drawn and will it cost each family two more lost lives and relationships that are beyond repair?

This was a fairly good story, though I did feel as if the characters sometimes suffered from some sort of identity crises. Kennedy was sometimes this mousy, shy, almost virginal girl and then there were times she became this overly sexual, sometimes slutty nymphomaniac. Dane was, more or less, consistently a jackass and there's simply no real excuse for any guy to treat a girl the way he did Kennedy. Of course, he does make amends and does change, so he isn't a totally terrible human being. The book, after all, is about redemption and forgiveness and it would have been pointless had he not evolved as a character.

Overall, The Line Between had some good moments and has a hint of star-crossed romance in it. The whole bullying part reminded me of one of my favorite books of 2013 but this book was able to distinguish itself enough that it's able to stand on its own merits. Like I mentioned earlier, the editing errors bugged me incessantly but this was an ARC so I can't, in all fairness, allow that to affect my rating. With an interesting story line and confused characters caught between love and hate, this is a book I feel NA readers will enjoy. I'm torn between giving it three or four stars so this gets 3.5 stars. ♥

*Note: There are currently no pre-order links for The Line Between but I'll post them here once any are available. ^.^