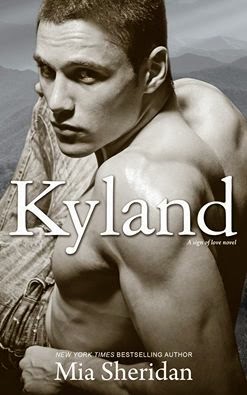 Goodness. Where do I even begin? I didn't think Mia Sheridan could amaze me more than she already had with one of my 2014 favorites, Archer's Voice, but obviously, I underestimated the gift this woman was blessed with because I found myself completely awestruck by the time I finished her latest offering, Kyland. I've read almost all the books in the Sign of Love series except for the last two releases which I was planning on finally reading this month. But even though I have yet to read the two previous books prior to this new one, I don't think I would be overstating it when I say that each one ends up breathtakingly surpassing the already high expectations and standards set by those that came before it.

"This is a mistake."

"How can love be a mistake?"

Tenleigh Falyn and Kyland Barrett are both from the poverty-stricken hills in Dennville, Kentucky. Not even the beauty of the Appalachian mountains can distract the people of their town from the sad fact that most of them are dirt poor. These two seventeen-year-olds have experienced abandonment and loss and know what it feels like to go to sleep with hunger burning a hole in their stomachs. They have no choice but to make do with what they have, but they're also doing their best in school, both with their eyes on the one prize that will guarantee them freedom from Dennville and a chance at a better future--the Tyton Coal Scholarship. They have plans, plans that they believe to be unbreakable...until their paths cross.

"I'm leaving this place behind when I go. Everything about this place. Even you."

Tenleigh and Kyland were never friends but there's a mutual awareness they have of the other, not simply because they're both physically attracted to one another but there's something that draws them both in. A single incident causes them both to begin to interact and from there, a friendship of sorts begins but they soon realize the depths of their feelings the more time they spend together and even when they try to avoid each other. There's an inexplicable pull that leads them to bare both their bodies and souls, sharing things that they've never shared with anyone else. They've both fallen so deeply in love but Kyland has always maintained that he's leaving after they graduate from high school, needing to escape Dennville.

"Until that moment, I didn't know my heart could be filled with awe and grief, joy and sorrow, all at the exact time."

As the day to announce the winner of the scholarship comes closer, both Tenleigh and Kyland begin to recognize the inevitable--one of them will go off to college, signaling the end of their love story. They both accepted that in the beginning, when they were both fighting for their chance at the scholarship. Now, it is no longer their names that they want being called out but the other's. When one finally wins over the other, hearts will be broken and lives will be changed forever. If their paths were ever to intersect again years later, will hatred and bitterness overshadow the feelings they once had or will the love they shared be able to overcome everything else and lead the way to a brighter forever after for both of them?

Half pain, half ecstasy.

Half grief, half joy.

Half my downfall, half my savior."

This book was heartrendingly beautiful. There was an innocence and hope to the story, personified by lead female character Tenleigh "Ten" Falyn, that offset the complexity and bleakness that surrounded it, personified to a degree by lead male character Kyland "Ky" Barrett. While both of them wanted to leave Dennville behind and create better futures for themselves, Kyland was obviously more desperate in light of his circumstances and the overwhelming loneliness that blanketed his life. They both give each other something to believe in, becoming selfless and wanting more for the other rather than for themselves. At their age, they have discovered what love is truly about and that, at times, it requires sacrifice.

"Someday, when I'm living my dreams. I'm going to think of all the things that broke my heart and I'm going to be thankful for them."

There's an old saying that goes "If you love someone, set them free. If they come back to you, it was meant to be." In the case of Tenleigh and Kyland, in letting go, they still held on to the love they had for each other. Sometimes, we need to leave behind the dreams we've long had for ourselves in order to create new ones that will include those we never expected to become a part of our lives. This book touched something in me and I hope that it'll touch something in other readers too. Whatever that "something" may be, Kyland is a story that will stay with me for the foreseeable future. I'm giving it five-plus stars and don't be surprised when this ends up on my year-end list of top favorites for 2015. This is a definite must-read! ♥

Grab your copy of Kyland on Amazon.