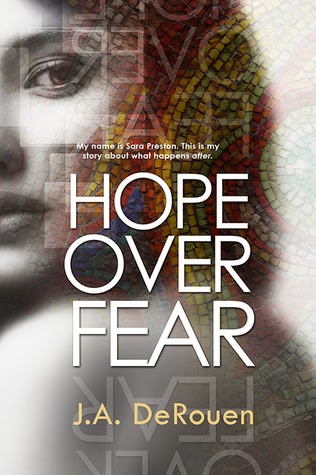 Hope Over Fear is the first book in the Over series and the debut novel of J.A. DeRouen. I purchased the book a few days ago, both because it was on sale and the blurb caught my attention. It's difficult to say "no" to a 99-cent book that has an intriguing story line, people. When I saw that the sequel to this particular book was up for review on NetGalley, I bit the bullet and requested for it. I know, I know. Like I needed another book to add to the pile that was already threatening to tumble over. Upon approval, I decided to read this first because I'm anal and things need to be done in order. ^.^

Sara Preston is a woman who's last relationship has left her with the kind of reputation that could have given Hester Prynne's a run for her money. Not only did she lose her boyfriend but she lost her best friend too, both being one and the same person. She wants to make amends to him and asks for his forgiveness and he gives it. He's moved on with his life and is set to marry. While taken aback at how quickly things are moving for her ex, Sara decides to take this as a sign for her to begin to try and move on with her own life and, hopefully, be able to forgive herself for her own failings and shortcomings.

When Sara meets Adam Hunt at an outreach program she's volunteering at, she immediately pegs him for a particular type a guy and their first real interaction makes her think that she's right. After an apology and spending more time with him, Sara realizes that Adam's actually a nice guy and very much single. Add to that his being a good looking guy and she knows she's in trouble. When he tells her that he's a father to two kids, she doesn't really consider it a hindrance to their relationship and understands his needs for not immediately introducing her to them. As time passes, though, her insecurities set in.

One particular incident blows up and Sara overhears things that Adam tells one of his closest friends. She's heartbroken and doesn't believe that there's any chance for them to survive such a hurtful event. Will both Sara be able to overcome her own fears and see that she deserves to have the happily ever after that's waiting for her or will she continue to drown in hopelessness, letting go of what feels like spending the rest of their lives with "the one"? It may take a few meddlesome but well-meaning and some own introspection for her to finally take a leap of faith and allow hope to win over her ever present fear.

Like I mentioned, the story line of this book was interesting and that's what had me grabbing a copy of it on Kobo. However, as I was reading it, I found myself becoming a bit disappointed, especially since I felt that Sara was too angsty for her own good. She had no one else to blame for the misery that was in her life because she made a few bad decisions. She didn't even feel it necessary to defend herself in the light of the wrong perception that some people had of her. I didn't really get where her insecurity was coming from and instead of feeling empathy for her, I was sometimes tempted to smack some sense into her.

I'm also not a fan of one of Sara's friends, Marlo. She was irritating and I so wanted to skip over all the parts that included her but then I wouldn't really be getting the full story if I did. I don't know if I would ever be able to read an entire book focused solely on her because she certainly didn't endear herself to me. If I had a friend like that, I would constantly be finding myself avoiding her. I mean, I have friends who have no filter when they talk but this girl was grating and obviously had her own hang-ups but found it more interesting to embarrass her friends rather than focus on her personal issues.

Aside from my feelings about a couple of the characters in the story, I also found myself bothered by the editing errors. I bought this book in Kobo so I assumed that it went through an editor and, upon checking the author's acknowledgments, saw that she did indeed have an editor. Unfortunately, I think one run-through was a qualified proofreader would have weeded out all the mistakes that were still in the text. :( It's sad when a promising book suffers from editing boo-boos, especially when it's a debut novel because an author really wants to be able to have their best foot forward for potential readers.

Now, it wasn't all bad. The blurb may have said that the male lead character, Adam, had secrets but he was forthcoming with his situation very early on. If anything, it was Sara who didn't tell him what truly happened when her prior relationship imploded on itself. As a reader, it was a nice change of pace to have everything out in the open and that there weren't any secrets that would shock me later on. It allowed me to simply watch as the relationship developed between Adam and Sara. All in all, Hope Over Fear was okay but ends up being another "what could have been" read. It gets 3.5 stars out of five. ♥