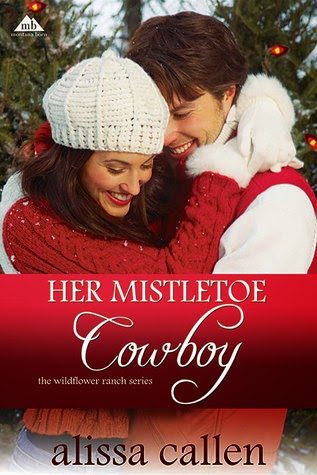 Her Mistletoe Cowboy by Alissa Callen is the second book in the Wildflower Ranch series and is also part of the Montana Born Christmas series. As was the case with the first book, I haven't read any of the other books in the second mentioned series but I feel that this installment works as a standalone. Book two is about a cowboy and a city girl who are both in mourning but find love and hope in each other.

Ivy Bishop was a corporate analyst who quit her job and the corner office she worked hard for as well as end her engagement as soon as she realized her ex-fiancé was cheating on her. She's come to Montana to spend the holidays alone, needing the time to get away from it all. After picking up a stray puppy named Molly, she meets a cowboy who makes her realize her heart was never broken after all.

Rhett Dixon, who readers met in book one, has become somewhat of a hermit but he enjoys focusing on his ranch. He didn't buy the entire property but is still surprised when the great-granddaughter of the original owner shows up to spend the holidays in the main house. He can tell that she's going through a rough time but he doesn't want to take advantage of her nor does he want to be her rebound guy.

The more time Ivy and Rhett spend together, the more difficult it gets for either of them to deny that it's more than just an attraction that's going on between them. Ivy is able to get Rhett to realize that his father truly is mourning the loss of Rhett's mother but is doing so in his own way. Rhett helps Ivy see that her feelings for her ex were never as intense as what she feels for Rhett.

I liked that the story didn't feel rushed and that the two main characters were genuinely nice people who weren't simply lusting after each other. This was an ideal read for the holiday season and a quick one at that. It's a story of love and family and being able to change one's plans when fate intervenes. Her Mistletoe Cowboy is a great addition to the series and gets four stars. ♥

Grab a copy of Her Mistletoe Cowboy on Amazon.