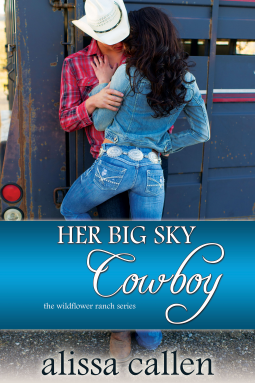 Her Big Sky Cowboy by Alissa Callen is the third book in the Wildflower Ranch series and is my favorite among the three titles so far. It's about a speech therapist looking for Mr. Right but can't seem to shift her attention away from a gray-eyed cowboy who never says much. Will they both risks their hearts on something they're both afraid will leave them broken if it doesn't work out?

Trinity Redfern is living her life on her own terms and likes being in control. She may not meet her parents' expectations but she's essentially happy with her job as a speech therapist and running a camp for children. She's particularly close to one five-year-old named Finn but keeps her distance from his uncle. She may be attracted to him but she's quite certain that he's all wrong for her...or is he?

Zane Nash isn't just quiet; he's somewhat of a recluse who prefers expressing himself with gestures, grunts, or one-word responses to questions. He becomes the guardian to Finn and notices that the formerly silent boy has been speaking more now, all thanks to the woman he's grown attached to. Zane has been burned once before and is more than wary trusting another woman...but is she worth it?

Trinity, whom readers of the series will remember from the two previous installments, and Zane seem like opposites but they seem perfect for each other, even though they appear to be the only ones not aware of it. They provide Finn a sense of stability and they're also able to bring out the best in one another. As they spend more time together over the summer, they're finding it more difficult to avoid their attraction.

This book had more drama than the first two books and it actually got me teary-eyed at one point. There are a few surprises, some of which I was able to figure out but I still liked the way the secrets came to light for the characters. Overall, Her Big Sky Cowboy shows that what we think may be right for us isn't always so and that entrusting your heart to someone may be risky but oh-so-rewarding. This gets 4.5 stars! ♥

Pre-order a copy of Her Big Sky Cowboy on Amazon.