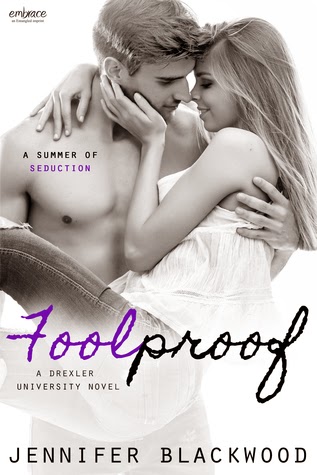 Foolproof is the second novel in the Drexler University series by Jennifer Blackwood and turns the spotlight on the respective best friends of the lead characters from book one. Jules and Ryan know what it's like to live a life that isn't really your own, adhering to the dictates and trying to live up to the expectations of your parents. The pressure has gotten to both of them in their own respective ways and when their paths cross for the summer, all they're looking for is someone to fool around with. Sometimes, though, all it takes is a few weeks for your life to change in ways you never saw coming.

Six months ago, Jules Carmichael's life imploded, forcing her to leave medical school in order to enter rehab for an addiction to a prescription drug that helped her deal with all the studying necessary. Now, she's trying to get her life back in order, or rather, the life that her parents expect her to be leading. She's spending the summer working at Office Jax because the idea of spending even a few months at her parents' home is something she doesn't want to go through. The last thing she needs right now is having to work side by side with the arrogant and cocky, albeit good looking and hot, son of her boss.

Three years in, Ryan DeShane has nothing to show for in terms of a college diploma. He finds himself having to spend the summer with his father after being unceremoniously kicked out of school. Given an ultimatum to figure out what it is he wants to do with the rest of his life, Ryan is forced to work at Office Jax, the store his father owns. Not only does he have to deal with his father getting on his case but he's also got a pesky cheater of an ex-girlfriend who doesn't seem to understand he's done with her. The last thing he needs is a blonde princess who makes him think she's all high maintenance.

The more they push each other's buttons, the less the irritation they feel and the more into the game of one-upmanship they become. Add to that the fact that they're both realizing that their first impressions of one another were oh-so-wrong and the summer truly begins to heat up between Jules and Ryan. Ryan hasn't done much flirting or dating in a long while so he decides to rely on a magazine article to help him get Jules, thinking that all of this is going to be temporary. Jules needs a stress reliever and she sees Ryan as the perfect cure to her present woes, believing a fling will heal what's ailing her.

As the summer progresses, so do their feelings for one another, falling for the one person they thought would be their summer fling. They provide the support the other needs and even inspires them to make certain choices that will put their lives on new paths and finally standing up for what they want. Just as they find the firm footing they've been seeking, Jules discovers a couple of things that make her begin to question whether any part of their relationship was real or if it was all just a game. Ryan desperately needs to prove to her that what they have is the real thing and that he wasn't playing her for a fool.

I absolutely LOVED this book! Jules was an interesting secondary character in the first book, Unethical, and I so wanted her to have her own story told and Ryan, who was mentioned several times as well, is the perfect partner for her. They were funny and authentic and simply had this chemistry that leapt off the pages. Their life stories resonated with me and their love story plus the eighties and nineties songs (which I could so relate to...and yes, I know that I'm dating myself here) had me smiling like silly. Foolproof is one of my favorite reads for 2015 (I've pre-ordered my own copy!) and gets five stars! ♥

Pre-order a copy of Foolproof on Amazon | B&N | Kobo.

My review of Unethical (book one) can be found here.