Review: "Caught Up in You" by Colee Firman 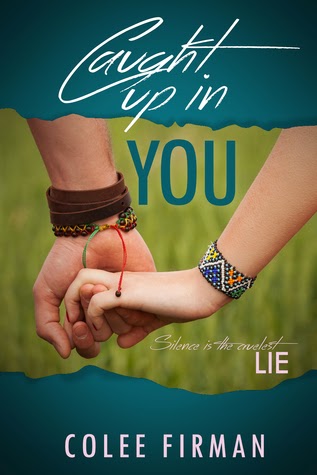 Caught Up in You is a new adult (NA) romance novel by Colee Firman and is about two young people trying to put their lives back together after experiencing life-changing events that have shaped them into who they are now. From neighbors who can't stand each other to lovers who have never loved anyone as much as they do one another, Brantley and Myles discover that falling in love is a lot harder than they thought and that choosing to stay silent is just as bad as not telling the truth.

Brantley Prescott is twenty years old and wants to continue living and working in the small town of Baylor Grove. She had already spent three years living with her soon-to-be married Aunt Jen, whom she loved a great deal but didn't want to impose upon any longer. She survived something unspeakable at seventeen and has the scars to bear evidence of her ordeal. Only a trusted few outside of family know what happened and she prefers to keep it that way, not wanting the pity she knows she'll see.

Myles Franco is twenty-three years old and wants to simply focus his attention on the video game that he and his best are trying to finish. His life imploded two years ago, forcing him to leave Princeton with just a year left before getting his degree. He refuses to return to the careless, reckless, and irresponsible life he once led and he certainly doesn't want to get involved with women, having learned his lesson the hard way. He simply wants to be left alone and not be bothered by anyone or anything.

When Brantley suddenly becomes Myles' new neighbor, they both notice how good looking the other is but doesn't want to have to do anything with them. Brant thinks Myles is an obnoxious jerk and Myles thinks Brant is a mouthy pain in the ass. While their attraction to each other is distracting, they don't do anything about it. It takes Mother Nature for the two to be thrown together and the days they spend together make them realize that there could be more than just a mutual crush.

Myles needs to leave for Japan soon after but is unable to tell Brant, with things progressing so quickly in their relationship. On the night he's about to ask her to wait for him, she tells him what happened to her three years ago. The following day, she goes off to spend the day with her best friend and waves goodbye to him, thinking he'll be there when she returns only to find out that he's left. Months go by until their paths cross again, but betrayal and anger may have replaced the love once there.

I quite liked this book. The story was interesting and the lead characters spoke and acted like their respective ages. They made their own set of mistakes that led to the problems in their relationship. There were a few times I seriously wanted to hit one or both of them upside the head. The lack of communication and the assumptions that were made were their biggest downfalls. Remember, people: when you assume, you make an ass out of u and me. Which was what happened with Brant and Myles.

There was nothing perfect about Brant and Myles and that's what I loved most about them. These two were survivors but I sometimes wondered if they would be able to survive their own tumultuous love story. There were a few editing errors in the book and since I received this after the book's release, I'm not sure if the errors were corrected by then. Even with that in mind, my overall impression of the book remains positive. Caught Up in You gets 4.5 stars and I happily recommend it! ♥

Grab a copy of Caught Up in You on Amazon.