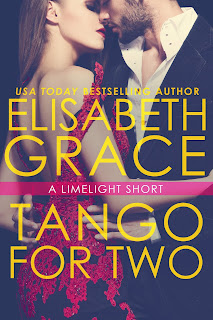 Note: This ARC was provided by Sassy Savvy Fabulous PR in exchange for an honest review.

Tango for Two is a short story in bestselling author Elisabeth Grace's Limelight series. I have yet to read the first three full-length novels in the said series, but I was able to enjoy this novella independent of the rest of the books and never felt as if I was missing something. They say it takes two to tango and tango they did, with a dash of flirting and more thrown in to keep the heat going in this love story. This was about Jasmine Andrade, a twenty-four-year-old makeup artist to celebrities, and Eduardo Flores, a thirty-something choreographer and dancer. When Jasmine agrees to participate in a charity telethon by dancing with a celebrity, she isn't too thrilled to learn who the celebrity is. Eduardo, however, proves to be the very sort of distraction that she needs, but after one kiss, he makes it clear that they can't cross that line again. But a dance as passionate and intense as the tango and with both Eduardo and Jasmine in constant close proximity to one another could end up with these two in each other's arms long after the music ends.

This was an enjoyable read, one that you can easily start and finish in less than an hour's time, with me taking about twenty to twenty-five minutes to read the entire thing. The story was fast-paced but it didn't feel overly choppy, allowing it to flow pretty well. Eduardo and Jasmine take notice of each other from the get-go, but he doesn't want to cross the line. The added complication of Jasmine's celebrity partner--someone whom I assume played some sort of significant role in the love story of Jasmine's friends who are mentioned in this short story in one of the full-length novels--proved to be not that much of a complication. This was really all about Eduardo and Jasmine and how their mutual attraction toes the line between remaining professional and becoming far more personal. I must admit that I liked how everything ended because it felt far more realistic than had it gone the far more expected route. Now I'm curious about the Limelight series and have the books on my to-be-read list. I'm giving Tango for Two four stars. ♥