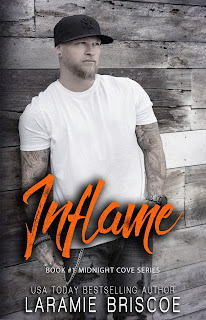 Inflame is the first book in a new series entitled Midnight Cove from author Laramie Briscoe, set in a fictional small town by the same name in the northeastern part of the United States. The series starter is about Ashford McKinley, a full-time firefighter and single father to six-year-old Sydney, and Emma--who didn't have a last name mentioned--who is a part-time waitress at the diner Ash and Syd go to and a part-time librarian who happens to have a flair for baking. They went to the same high school, with Ash being the football player who only had eyes for his girlfriend Courtney--who would later be his ex-wife and Syd's mother--Em had a crush on the guy who was a couple of years older than her. When Ash finally takes notice of Em, he can't deny how attracted he is to the grown-up version of the quiet girl he glimpsed in their teenage years. But with so much on his plate, will Ash be able to give his time to Em, and will Em be willing to be with a man who already has a daughter? Are these two prepared to take the risk?

There's very little angst or drama that goes on in this book, and I confess that at times, it did feel a bit flat to me. I'm not saying that angst or drama is necessary in every single book, but there wasn't anything in terms of conflict that could have made the story a tad more interesting. Any hint of a conflict was quickly resolved, and at times, it was done so off the page. I did like the characters themselves and how there was a sense of maturity to the adults and even six-year-old Syd. As a side note, I was rather confused with the use of the term "toboggan" since I've always known it to mean a narrow type of sled, and it was used in the book to mean something akin to a beanie. Google showed that it's a term used in the South to mean a tobogganing cap. You learn something new every day.

There isn't really that much else for me to say other than it was an okay read that fell short of my expectations. I'm not saying it was a terrible read; it wasn't. My point is, I expect a lot when it comes to Laramie Briscoe's books because I know how good of an author she is thanks to her standalone, Trick, and her Moonshine Task Force series. So yeah, I was hoping for more, but what I did get was good enough, just nothing notable. 3.5 stars go to Inflame. ♥