Review: With a Twist by K. Evan Coles & Brigham Vaughn (The Speakeasy #1) 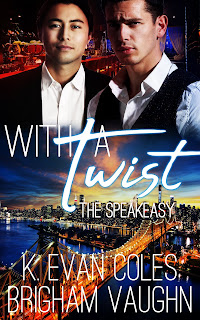 Note: An advanced reader copy (ARC) was provided by the authors via Vibrant Promotions.

In the past, Will hadn't understood his mother's unwavering devotion to her husband, but he'd finally begun to grasp it. The weeks without David had been excruciating and their relationship had barely begun. What must it be like to be with the same person for ever fifty years? And how impossible would it be to say goodbye?


Two of my absolute top reads from last year were Wake and Calm, both belonging to the Tidal series from the writing duo of K. Evan Coles and Brigham Vaughn. While Riley Porter-Wright and Carter Hamilton got their long overdue happily-ever-after, there were a number of secondary characters who had more than caught my attention, and they were more than interesting enough for me to want to learn each of their stories rather than pair them off with one another. Three in particular had me crossing my fingers and toes that Coles and Vaughn had their HEAs planned out for the future: William Martin, Jr., Jesse Murtagh, and Kyle McKee. So, imagine my sheer thrill upon finding out that there was a spin-off in the offing--and the first one to get a shot at a happy ending? Riley's ex--Will!

Thirty-three-year-old Will Martin still feels that pang of loss whenever he sees his ex and his ex's boyfriend together, but there was no competing with first love turning out to be the forever kind. Maybe some form of distraction will be good, but he doesn't expect it to come in the form of a phone call from his mother asking him to come home to Long Island because she and his sister need him--his estranged father was dying of pancreatic cancer. Things are bound to get uncomfortably awkward, but temporarily putting the life he loves in Manhattan on hold to do his duty by his mother and sister. He doesn't hold out much hope that he and his father will mend fences, and the last thing that Will is prepared for is to be attracted to his political protege, thirty-four-year-old State Senator David Mori, who just happens to be hot, gay, and Japanese-American...and very much a Republican.

This series starter had huge shoes to fill, but fill them it did. If the shoes were a cup, it would have runneth over. Yes, it was THAT good. I shed tears. SHED THEM. I wasn't teary-eyed nor was this a one-tissue sort of read. Nope. I had to stop reading because the words on my tablet had gone too blurry because of all the crying I was doing. What happened at this point in the book was inevitable, but not my crying jag. I was that emotionally invested, and not just in Will and David's love story but in the story of Will's family and the truths and realizations that they had to face in such a limited time frame. The writing was exceptional, and given that I have no idea if K. Evan Coles and Brigham Vaughn split the work by chapter or take on their respective third-person points of view for the main characters, there was a seamless quality to it that I wanted to give a standing ovation to. With a Twist is a story of family--the one we're born into and the one we create for ourselves--and forgiveness, and I highly encourage you to read it. I'm giving this 2018 favorite--yep, consider a spot reserved on my year-end list of top reads--five-plus stars, and now the waiting game begins for the second book in the Speakeasy series and who it may be about next. ♥

Purchase With a Twist on Pride Publishing | Amazon | B&N | Kobo.