Review: Because You're Mine by Claire Contreras 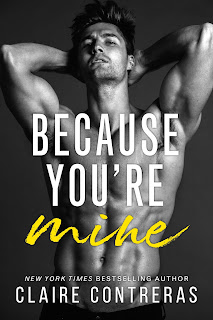 Bestselling author Claire Contreras takes on the mafia romance sub-genre with her latest release, which I suspect could be the first in a new series surrounding a particular set of siblings. Because You're Mine is the story of a twenty-eight-year-old woman named Catalina Álvarez. She's the principal dancer for the New York Ballet, a prestigious for any dancer. She performs every role given to her with passion, ballet being one of the very constants in her life that she could rely on. The other is her younger sister Emmaline, and Cat would do almost anything for Emma--even pretend to be her during the first couple of weeks of a class she needs but can't attend. The professor turns out to be like Cat--a stand-in--but he makes it known that he's considering not allowing her to enroll in the class for one simple reason: he wants his student. But thirty-year-old Lorenzo Costello is a man with secrets--just like Cat. You see, Cat is hiding one thing from those around her--one vital piece of information she's kept for a decade. Her father is none other than Joseph Masseria, one of the country's most powerful mob bosses.

I know how well Contreras can write romance in general, and I know how adept she is when adding suspense to said romances. With her newest book, I was excited to see what she had up her sleeves. The blurb caught my attention, and as always, hopes were high that said attention would be held from start to finish. Here's the thing with lofty expectations: what may seem like minor hiccups feel more like potholes that the book keeps tumbling into. It took more than half the book for me to feel the chemistry between Cat and Loren. I truly wanted to believe these two had a connection from the get-go and that they were, at the very least, in lust with one another. But yeah, I struggled to see it. Also, I know that Cat is a woman who was two years shy of hitting thirty, and yes, she had tried to avoid anything related to her mob boss father for ten years, but God, she just came off as so utterly naive when it came to Loren in that first half. The second half fared far better, thanks to a couple of revelations and twists to the story. So, I'd give the first portion three stars and the second one four stars, leaving Because You're Mine with an average of 3.5 stars. Fingers crossed that the two other Masseria siblings get their own tales as well. ♥

Purchase Because You're Mine on Amazon.