Review: Getting Schooled by Emma Chase (Getting Some #1) 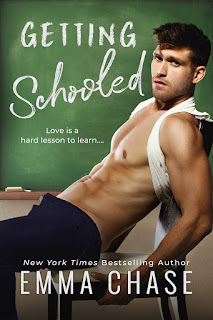 We were “the” couple in high school—Brenda and Eddie from that Billy Joel song. The star quarterback and the theater queen.

She was the love of my life, before I had any fucking idea what love was...and then, still even after I did.


You'd think that the fact that I'd pre-ordered and promptly listened to the audiobook when it was released in January would have stemmed my enthusiasm for Getting Schooled, but nope! I fell in love all over again with this second chance romance from one of my all-time favorite romantic comedy authors, Emma Chase. Reading this book also clued me in on the fact that this was just the first in a new series titled Getting Some. With a whole lot of humor and equal parts heart and heat--and a dose of drama that brought a tear to my eye--re-acquainting myself with Garrett Daniels and Callaway Carpenter's love story further secures its spot on my top reads list for this year.

Garrett and Callie were teenagers who were young and love--the couple in high school that everyone envied and looked up to. But Callie had dreams that would take her to the opposite coast, away from Garrett and their hometown of Lakeview, New Jersey. Fast forward more than a decade and a half later and Callie's back in Lakeview to help her recuperating parents out. She snags a job as the high school's theater teacher for the school year--the same high school where her ex happens to work as the history teacher and football coach. She can't afford to fall for Garrett, not with her leaving after ten months to her life back in California, but when the two start reminiscing and begin to make all new memories, will Callie still be able to do what she did years ago or will she decide to stay?

From the banter to the bickering, Garrett and Callie were the kind of couple that I love getting to know, becoming invested in their story, and wishing they were real people so that I could watch their second chance at love play out. Emma Chase came up with a fantastically fun-filled story of true love getting an opportunity to finally get things right. This also had one heck of a great supporting cast of characters, but there is one character in particular who claimed my heart from the moment he made his presence known--Snoopy, Garrett's seventeen-year-old albino beagle. What can I say? The dog always wins out for me, and Snoopy is one of the most memorable fictional canines I've come across in all of my years of reading. But he was just one of the reasons why Getting Schooled was as great of a read as it was. I'm giving this five-plus stars and am already excitedly awaiting the rest of this series! ♥