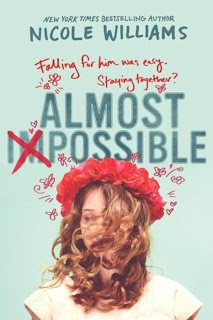 This is my first young adult (YA) romance from bestselling author Nicole Williams, and because I've enjoyed a lot of the previous books I've read by Williams plus a blurb promising what I felt was a really sweet coming of age story, I had certain expectations going into Almost Impossible. For years, she went where her rock star mother went, but for this summer, seventeen-year-old Jade Abbott was going to stay put in one place--California, to be exact. She would spend time with her aunt and see what life being a regular teenager was like. She may have been homeschooled, but she does plan on going off to college after she gets her high school diploma. If she thought her summer would consist of nothing more than having fun in the sun, however, she had another thing coming and she had the boy next door to thank for what could very well be a life-changing summer. But what happens after?

This YA book had potential, and for the most part, it was potential that was pretty much to varying degrees. I liked Jade Abbott. She was a girl who was looking for some semblance of normalcy, or at least the sort of normal that other kids her age experienced. I liked Quentin Ford as well, especially because it was nice to have a coming-of-age story where the girl doesn't fall for the bad boy. There's one major twist in the story, and it was a twist that, admittedly, I figured out very early on. Now, there are times where I still have that feeling of anticipation leading up to the revelation of whatever secret has been kept for so long even though I already know what said secret is. However, in the case of Jade and Quentin's story, it was of an "okay" moment than an "ooh", and in the end, that's what Almost Impossible ended up being--okay. I had hoped for more, but this still turned out to be a 3.5-star read. ♥