Book Spotlight: Stubborn as a Mule by Juliette Poe 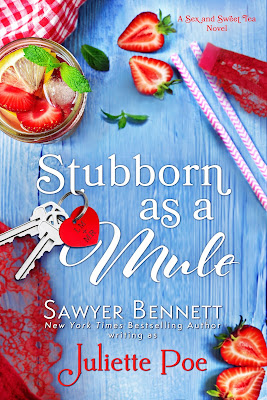 About Stubborn as a Mule
Down in Whynot, NC, there are three things that hold true: 1) life moves just a little bit slower, 2) family means everything, and 3) you don’t mess with history.

When his family decides to sell a home that’s been part of their history for over a century, Lowe Mancinkus is madder than a hornet. To add insult to injury, the woman who purchased it is some fancy pants, city girl looking to fix it up and sell it off. Doesn’t matter that she’s sexy as hell or that just being near her gets his blood racing like never before. That home belongs to his family, or at least it did until she came to town.

Well that just won’t do, now will it?

From the moment that she laid eyes on the historical home in rural North Carolina, Melinda Rothschild knew Mainer House was something special. The perfect escape from life in New York City, Melinda signed the papers and set to work restoring the house to its natural beauty. That is until an angry Lowe showed up on her doorstep one day. With a scowl on his handsome, chiseled face. And a shotgun in his strong, muscular arms.

Is it getting hot in here?

Melinda’s about to get a lesson on life in the south, but Lowe is about to learn a lesson of his own – this city girl doesn’t back down from a fight. 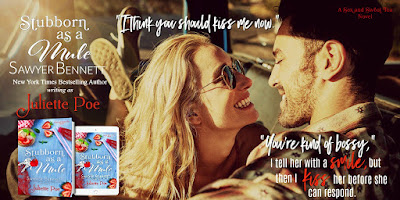 Read my 4.5-starred review of Stubborn as a Mule.

Add Stubborn as a Mule on Goodreads. 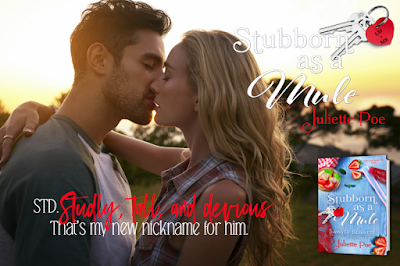 An Excerpt from Stubborn as a Mule
“Looking good, Lowe Mancinkus,” I hear a woman call out as I stretch upward to paint the top of the frame around the window. Turning my head to look over my shoulder, I see Lynette Carnes getting ready to walk into Sweet Cakes across the street. She’s our town’s very own Daisy Duke. By that, I mean she struts around in miniscule jean shorts, high heels, and a sleeveless blouse tied off just underneath her very ample chest.

She’s definitely nice to look at, although she doesn’t have much going on above the cleavage.

“Morning, Lynette,” I call back. “Lookin’ good yourself.”

She grins and blows a kiss at me before walking into Larkin’s shop.

The front door opens and Mely steps out onto the porch, carrying a cup of coffee. There’s no doubt in my mind she witnessed that exchange from the other side of the doorway. It’s obvious by the pinched expression she has on her face. Still, she brings the coffee over to me and sets it on the porch rail.

“Thanks, darlin’,” I tell her as I go back to brushing paint over the layer of primer I’d put on a few hours ago. I’d decided to work half a day here at Mainer House, not because I was anxious to get the work done, but because I wanted to be around Melinda Rothschild.

She may not be strutting around in little shorts and a low-cut blouse, but she is most definitely a prettier picture than I’ve ever seen around these parts. She’s wearing a white sundress with a halter top, and her shoulders are lightly tanned with tiny freckles. Her legs are long, bare, and perfectly adorned with nothing more than a pair of simple white sandals. Her silky blonde hair is pulled away from her face at the top of her head and she looks like a breath of fresh air.

Mely leans against the porch rail, crosses her arms low under her breasts, and watches me work for a minute. I wonder if she likes what she sees.

There was going to be another kiss last night if Morri hadn’t managed to ruin that little moment. And while I’d never stoop to mention this to Mely, I’m pretty sure he’d been hovering at the top of the stairs, just waiting to ruin it.

“Much better than hot pink,” Mely says as I continue to apply paint to the casing. I have no clue what the hell I was thinking when I painted her house pink. It was an attention getter and since the two people whose attention it got were Mely and Judge Bowe, it doesn’t take a genius to figure out I might have been pulling on her metaphorical pigtails a bit.

“I should have this finished by tomorrow,” I tell her. “Then all will be right again.”

“Odd since it took you a single night to do the damage,” she quips. I don’t look back at her, but I hear the laughter in her voice.

“Well, neon pink isn’t all that easy to cover up,” I tell her with a laugh.

She snickers and I can’t believe she was trying to get me thrown in jail last week. My how the mighty have fallen.

“When in Rome and all that,” Mely says and I turn to look at her from my perch on the ladder. She jerks her chin over her shoulder in the direction of Sweet Cakes. “Is that the standard southern girl uniform?”

Chuckling, I cut my eyes over to Sweet Cakes where sexy Lynette just disappeared into. I’m not about to tell Mely that I have actual carnal knowledge about that southern girl, even if it was back in my younger years.

Looking back to Mely, I take in her stylishly sweet dress that doesn’t reveal much but is still sexy at the same time. Giving her a wink, I say, “There’s nothing standard about you, Melinda Rothschild, so I’m advising you to stay away from that look. I think you’re mighty fine just the way you are.” 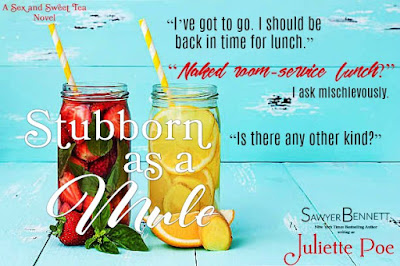 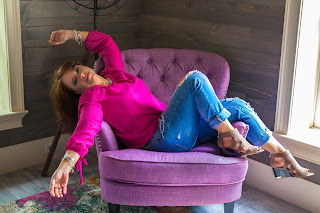 A fun-loving southern girl, Juliette knows the allure of sweet tea, small towns, and long summer nights, that some of the best dates end sitting on the front porch swing, and that family is top priority. She brings love in the south to life in her debut series, Sex and Sweet Tea.

When Juliette isn’t delivering the sweetest kind of romance, she’s teaching her southern belle daughter the fine art of fishing, the importance of wearing Chucks, and the endless possibilities of a vivid imagination.