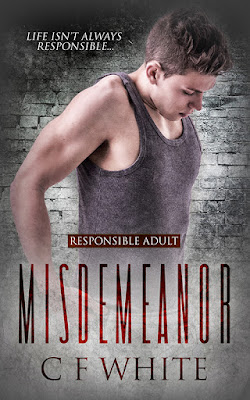 After his mother tragically dies and his deadbeat father goes off the rails, nineteen-year-old Micky is left to care for his disabled little brother, Flynn.
Juggling college, a dead end job, and Flynn's special needs means Micky has to put his bad boy past behind him and be the responsible adult to keep his brother out of care. He doesn't have time for anything else in his life.

Until he meets Dan.

About C.F. White
Brought up in a relatively small town in Hertfordshire, C.F. White managed to do what most other residents try to do and fail—leave.

Studying at a West London university, she realised there was a whole city out there waiting to be discovered, so, much like Dick Whittington before her, she never made it back home and still endlessly searches for the streets paved with gold, slowly coming to the realisation they’re mostly paved with chewing gum. And the odd bit of graffiti. And those little circles of yellow spray paint where the council point out the pot holes to someone who is supposedly meant to fix them instead of staring at them vacantly whilst holding a polystyrene cup of watered-down coffee.

She eventually moved West to East along that vast District Line and settled for pie and mash, cockles and winkles and a bit of Knees Up Mother Brown to live in the East End of London; securing a job and creating a life, a home and a family.

Having worked in Higher Education for most of her career, a life-altering experience brought pen back to paper after she’d written stories as a child but never had the confidence to show them to the world. Having embarked on this writing malarkey, C.F. White cannot stop. So strap in, it’s gonna be a bumpy ride...