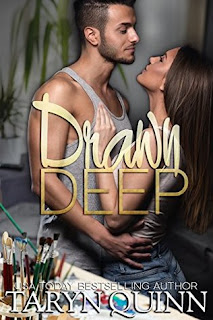 Drawn Deep is the second book in the Afternoon Delight series from Taryn Quinn, the pseudonym of the writing team that is Taryn Elliott and Cari Quinn. This novel was previously published by Samhain Publishing in December of 2014 under Cari Quinn's name alone. While part of a series, this can be read as a standalone, although it does share the same female-male May-December trope as Dirty Distractions, the first in this contemporary romance set.

She doesn't believe in commitments and he believes in love. Add that to the age difference and the whole virginity angle and Drawn Deep proved to be an interesting read indeed, one that I found myself liking a smidgen more than its predecessor. Michael was such a darling male main character and I think it was great that he was the one who was pushing for more from Kim. He was certainly more than he appeared to be and getting to know him was fun!

Just like the book before it, this second in a series was a fairly quick read, and one that had sweet and sexy wrapped neatly in an enticing package. And just like with Sara Carmichael before her, I wasn't a fan of Kim O'Halloran's either and found myself wishing Michael had fallen for someone who was far more worthy of his love and affection. I did like Michael and the overall story line, so I'm giving Drawn Deep 3.5 out of five possible stars. ♥

Read my reviews for the Afternoon Delight series: