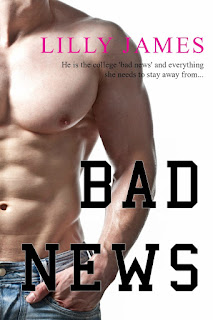 Bad News is a new adult (NA) romance from Lilly James and it's the story of two college students--freshman Louisa Dawson and junior Hunter Holland--who are as opposite as two people could get personality- and persona-wise, but fall in lust and then in love. Hunter is considered "bad news"--the bad boy jock who could have any girl he wanted and with a reputation he's more than earned--and he's proving to be quite a distraction for good girl Louisa. She wants to focus on her studies and keeping her grades up, but maybe she needs someone like Hunter in her life, especially since it becomes clear that Hunter has no intention of going away anytime soon. Can someone as naive and innocent as Louisa survive with her heart fully intact with someone as bad to the bones as Hunter?

Okay, let's be honest here. Coming up with a completely original story line is difficult in an age where countless romance books are released on a daily basis. After all, tropes are there because they're often the go-to foundations on which a love story is written. So, I totally understand that there will be books that share similarities. However, the reader in me always holds on to the hope that an author will give a tired, old story line their own bit of creativity, rendering it fresh enough that it can stand out in a sea littered with lookalikes and sound-alikes. In the case of Bad News, there was just so much--too much--of it that rang familiar, almost as if it followed step by step a manual of how to write a story set in college about the bad boy and the good girl, without adding any variation.

Now, I'm not saying that Bad News is, well bad news. It's okay. But that's where I have a problem with it. There's nothing about it that makes it stand out, nothing that makes me go, "Oh wow! I so wasn't expecting that!" This book was everything you would expect in a story that involved a college jock who could be the poster boy for manwhoring and a goodie-two-shoes freshman who was the epitome of a clueless virgin. It was obvious where the story was headed very early on, leaving nothing to the imagination. Again, that doesn't necessarily mean this was a terrible novel. It was just your regular, run-of-the-mill NA romance, and while I don't really need to be wowed by every book I read, I don't think it's too much to ask for "oomph" instead of "ho-hum". Bad News gets three stars. ♥