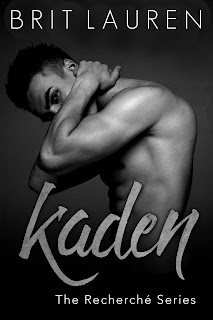 Kaden is the second story in Brit Lauren's Recherché series, which follows the escorts of the privately owned company by the same name. Kaden Ryan is the youngest male escort in the company and his pretty boy looks have earned him a loyal following. He's even got himself an elderly client who he simply spends time with. Being an escort has afforded him the opportunity to pay for medical school because he knows that there's life beyond being paid to be with a woman in one form or another. In the short time he's been with Recherché, he's gotten used to being with women who could easily be classified as "cougars" or women who are several years older than him. Kaden's latest client, though, is different from all the others. Yes, she's older, but she takes control of their every meeting, making sure to test Kaden's limits, taking exactly what she wants from him while seemingly barely even considering what he may need from her. He's not supposed to form any interest with any of his clients but Melanie Myers is in a class all her own.

This second and latest installment in the Recherché series was quite different compared to the series starter, Thor, and I mean that in a good way. Kaden and Melanie are not your typical couple and if you're looking for romance, might I suggest that you move along because this book was all about the sex and there was not a hint of romance in sight. Melanie is a strong female main character and there's a purpose to her sessions with Kaden. There's a hint of innocence in Kaden plus an unexplored side to him that Melanie seems to see and wants to bring out. I won't go into further detail but suffice it to say that how their story ends was unexpected but not unwelcome. I like it when an author manages to surprise me and because the first book didn't offer up anything new in terms of story line, the fact that this didn't go in the way I was expecting earns it bonus points. It looks as if Maddox and Cora are going to be paired up but I'm still most looking forward to Xavier's story. For its creativity and originality, I'm giving Kaden, four stars. ♥