Cover and Blurb Reveals: Touching Down by Nicole Williams

August 31, 2016
Nicole Williams is fast becoming one of my favorite authors, thanks to discovering her writing this year and falling in love with the two titles I've read so far. Now, she follows up one of my top reads for 2016, Stealing Home, with another sports romance that has a blurb that sounds as good as its cover looks. Take a gander at Touching Down, due for release this October: 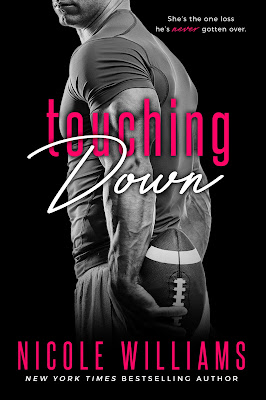 About Touching Down
The whole world might be in love with him. But all he’s ever loved is her.

Grant Turner’s name is synonymous with football. The fans and media can’t get enough of the player known as The Invincible Man, a nickname he earned while growing up in one of the toughest neighborhoods in the country and the nickname he’s kept by being one of the best players in professional football today. No one can take him down. He’s unstoppable.

But even a suit of armor has its weak point, and Grant’s has always been Ryan Hale.

They were a couple of kids when they fell in love, and just when it looked like the happy ending neither expected was within reach, Ryan disappeared. No explanations. No good-byes.

Grant coped by throwing himself into the game for seven years, and he’s finally moved on. Or so he thinks.

When she walks back into his life, all of those feelings come crashing back, despite the warnings in his head that tell him she’ll leave him again. Grant can withstand the league’s toughest defensive line, but he’s always been weak where she’s concerned.

No man can take Grant Turner down.

But one woman certainly can.

Add Touching Down on Goodreads.