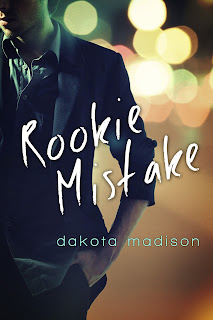 
Rookie Mistake is the fourth novella in the interconnected California Dreamers series from bestselling author Dakota Madison, but it’s a novella that can be read as a standalone as well. Maya Navarro is a police officer who has gotten her heart broken one time too many, with her latest ex citing her job as his main reason for splitting up with her. When her best friend suggests she get over the break-up with a hook-up, Maya finds herself in bed with CJ, a handsome guy she meets at a bar, exchanging nothing more than first names. It proves to be a night for both of them to remember, with CJ making it clear that he wants to see more of Maya. And he gets his wish in a way he never expected when Maya’s first day as a training officer has her meeting her new trainee named Cody Jackson, who is none other than CJ.

The story was pretty good but I didn’t really feel the connection between the main characters. The first meeting was lackluster, and even the hook-up itself felt more mundane than memorable. It was made worse by this tension that was anything but sexual when Maya and Cody started working together. She treated him like he was some idiot child and maybe it had to do with her pretending she didn’t feel more than she did, but still, it was rather unprofessional. I also wasn’t at the point where I believed these two were falling in love with each other. The idea behind the story was okay and Maya and Cody were likable enough characters—Cody more than Maya—but Rookie Mistake, for all intents and purposes, a romance story and it just lacked the romance and chemistry that I wanted. Three stars. ♥