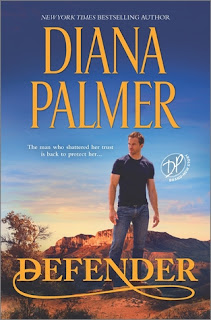 I'm not exactly sure how to find the right words to put together this review. This is my second Diana Palmer read and while the first one was okay, I was hoping that this second one would be better and let me experience what many fans of the author must experience when they read her books. Unfortunately, Defender just wasn't for me. First of all, I had no clue that this was part of an on-going (and VERY lengthy) series. Had I known, I would have probably not decided to sign up to read it. I prefer reading all the books that have come prior before I read the newest one in a series, and I already skipped ahead with that other book of hers that I read and reviewed. But see, that one only had four books ahead of it, while this one had dozens, with Goodreads saying this is the 45th installment but I was at 51 when I counted the ones on the publisher's website. Now, I wouldn't be griping had the book felt like a standalone, but there were A LOT of characters who would pop into this particular story, characters who were obviously part of this series!

So yeah, there was some frustration on my end, and I can usually deal with that, but the story itself just had me feeling underwhelmed from start to finish. There was a lot of unnecessary fluff thrown in and it became more of filler than anything else. I didn't really feel the chemistry between Isabel Grayling and Paul Fiore, and I wasn't rooting for them, not when you've got someone like Paul, who's too busy worrying how the rest of the world will see him as a man who earns his own money being with an heiress. Insecure much? There wasn't enough focus on the romance aspect, making it a secondary thing to all the entering and exiting of way more supporting characters than I believed were needed. I get it. These are men who've had their stories told in the series before, but was it necessary to include them here? I feel bad having to write this review because I don't want to come off as unappreciative of the efforts the author put into writing the book, but I also have to be honest, albeit in as nice a way as possible. Defender gets two stars. ♥